The best examples of architecture in Lisbon and Portugal 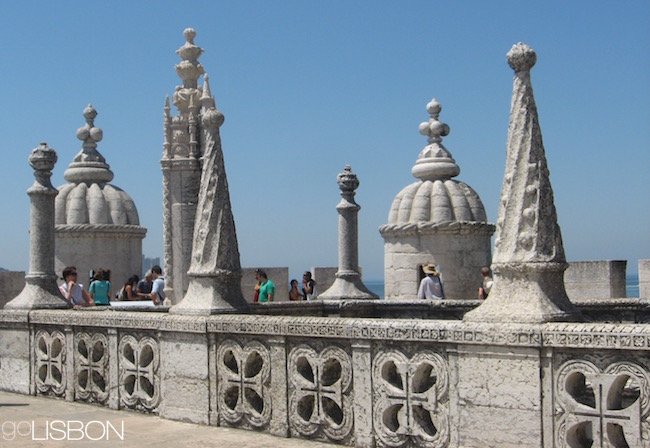 The Age of Discovery left a legacy of fine architecture in Portugal. The finest examples are found in the country's religious buildings and magnificent palaces, most of them showing outside influences harmoniously blended with local traditions.

The earliest architectural monuments are the megaliths and mysterious dolmens in the Alentejo province dating from between 4000 and 2000 BC, and the Celtic hill forts from 800-200 BC in the north of the country. Some of these forts were later absorbed by the Romans, whose architectural legacy includes a temple in Evora, several stone bridges, and residential villas. Of the later Germanic invasions are a handful of Visigothic chapels, and from the Moors are several castles.

Romanesque influence arrived in the 11th century when Portugal was emerging as a nation state, brought from France by Burgundian knights and monks. Cathedrals were built in this style as local fortified castles, explained by the need for fortification against the continued military threat of the Moors and, later, the Castilians. The cathedrals of Lisbon, Coimbra, Porto, and Braga therefore have crenellated façade towers.

Gothic architecture developed at the end of the 13th century in the center of the country, in the form of large monasteries. The earliest example is the church of Alcobaça's Monastery, considered the finest example of Cistercian architecture in Europe. The most perfect expression of Gothic architecture however, is found in Batalha Monastery, which influenced other buildings throughout the country, such as the cathedral in Guarda, and the now-ruined Carmo Church in Lisbon.

Gothic sculpture also developed in the 14th century for the adornment of tombs. The most beautiful examples are those of Inês de Castro and Dom Pedro in Alcobaça Monastery.

At around the same time castles were built to be used in wars against the Moors and then the Spanish, remaining today as prominent features of the landscape, with many featuring massive double perimeter walls and an inner square tower. The most impressive examples from this time are the castles at Almourol, Obidos, and Bragança.

In the 15th century, the Manueline style marked the transition from Gothic to Renaissance in Portugal. Named after Manuel I, the king at the time, it is an ornate and imposing style inspired by the voyages of discovery, drawing heavily on nautical themes, usually with ropes and coral in twisted stone topped by armillary spheres and the Cross of the Order of Christ. The first Manueline building was the Church of Jesus in Setubal, and later, Manueline touches were added to Batalha Monastery. The most famous Manueline examples were built next -- Lisbon's Belem Tower and Jeronimos Monastery, and the marvelous window in the castle of Tomar, filled with marine and nautical themes.

The Baroque style began in the 17th century, especially in the north of the country, where it can be seen in both religious and civic buildings. The first truly Baroque Portuguese church was Santa Engracia (the National Pantheon in Lisbon), and later, the wealth coming from Brazil made the early 18th century a period of great opulence: Woodcarving became popular, much of it gilded with Brazilian gold, adorning numerous church and palace interiors. There are some mind-boggling opulent Baroque masterpieces, such as the monumental staircase of Bom Jesus Church in Braga, Vila Real's Mateus Palace, and the palace in Mafra.

The second half of the 18th century saw the return to the Classical style, especially in Lisbon after the Great Earthquake, and the return of the Manueline style, as seen in Buçaco's palace, Lisbon's Rossio Station, and in parts of Sintra's Pena Palace.

In the 19th century there was an increase in the use of iron and steel in train stations and other grand buildings, reflecting Portugal's emergence as a growing industrial nation. Gustave Eiffel built iron bridges across the major rivers, and the Eiffel Tower-like Santa Justa Elevator was later built in Lisbon.

In the beginning of the 20th century there was an Art Nouveau fad, seen in cafes and shops of the bigger cities, and since the 1974 revolution leading architects like Alvaro Siza Vieira and Tomas Taveira have built impressive postmodern buildings like the towers of Amoreiras, and the futuristic buildings in Lisbon's Parque das Nações district.

Vernacular architecture differs greatly according to locally available building materials and climatic conditions. As in most Southern European countries, most houses are built in stone and painted in vivid colors. In the south most houses are whitewashed, with the doors and windows framed in yellow or blue.

Dotting the hillsides, particularly in coastal regions, are windmills that have been used in the country since the 11th century. Most have a cylindrical shape with a conical roof, are painted white, and have canvas sails.

The Pelourinho: Throughout the centuries, stone columns or pillories ("pelourinhos") were erected in towns all over Portugal. They are believed to have originated in Roman times, becoming prominent in the 12th century. Originally they served as a form of punishment, used to chain criminals, but eventually became a symbol of municipal or feudal authority, placed beside town halls or bishop's palaces.
In the 16th century they became elaborate works of art, with the stone column richly decorated, often toped by King Manuel's motifs of an armillary sphere and Cross of the Order of Christ. One of the most unusual pillories, covered with stone dots, is found in Elvas.