For coffee, a refreshing drink, or a light meal


Most Europeans love coffee and cakes, but the Portuguese are the ones who officially spend the most time and money in cafés, according to a study. In Lisbon (and all of Portugal), the coffeehouse is an institution. It has been so since the turn of the 20th century, when many were the favorite haunts of literary figures. Several hold on to that historical past with their wonderful Art Deco decoration and have become popular tourist attractions.

Every café or traditional pastelaria (pastry shop) serves croissants and pastéis de nata (custard tarts) which is the most popular Portuguese pastry. Many also serve light meals along with the popular strong bica (espresso) or milky galão (latte).
But if you also want to enjoy the outdoors as you drink, you'll find an esplanada (pavement café) in practically every main street or avenue, and there is usually a kiosk café standing by the several hilltop miradouros (viewpoints) -- the one by Miradouro da Graça is a good choice for a drink at sunset.

Below is a list with some of the best cafés in the city. 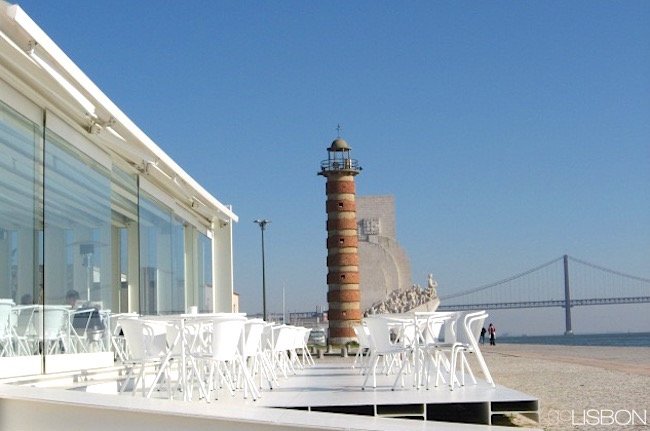 À MARGEM
Doca do Bom Sucesso, Belem
This riverfront glass box between the Discoveries Monument and Belem Tower was designed by three architects, and is a great place to have a light meal, freshly squeezed juice, salad, or sandwich at the tables outside, as you gaze at the Tagus River.

ANTIGA CONFEITARIA DE BELEM
Rua de Belem, 84-92, Belém, Phone: 21 363 7423
If you visit only one café in Lisbon, this should be it. It serves an average 10,000 Pastéis de Belem (custard tarts) a day (the record is a staggering 55,000), a specialty made with a secret centuries-old recipe.
You can have them inside the large rooms covered with 17th-century tiles, or use the take-away service that provides special paper tubes holding half a dozen.

BENARD
Rua Garrett, 104, Chiado, Phone: 21 347 3133
Located next to the famous Brasileira (see below), this is another historic café, in business since 1912. It serves the most mouth-watering freshly baked croissants in the city with jam or chocolate, which you can savor as you watch the streetlife of Chiado at a table outside.

BRASILEIRA
Rua Garrett, 120, Chiado, Phone: 21 346 9541
This is the city's most famous café, opened in 1905 with a magnificent art nouveau décor and known for the intellectuals who stopped by on a daily basis in the early 20th century. One of them was poet Fernando Pessoa, whose bronze statue (perhaps the most photographed in the country) stands amid the clientele of both young and old.

CAFE MARTINHO DA ARCADA
Comercio Square, Downtown, Phone: 21 887 9259
Located under the colonnades of Comercio Square, this is the oldest cafe in Lisbon, opened in 1782. It recalls the days when it was a favorite haunt of Fernando Pessoa, whose image is painted on the wall. It also has an adjoining restaurant.

CAFE NICOLA
Rossio Square, Downtown, Phone: 21 346 0579
Nicola was another of Lisbon's literary and political meeting points when it opened in 1929. It maintains part of its past in its art deco façade, but nowadays serves mostly as a tourist stop.

CNC - CAFE NO CHIADO
Rua do Picadeiro, 11-12, Chiado, Phone: 21 346 0501
Located on a calm street of bustling Chiado next to São Carlos Theater, this café is also a restaurant serving Portuguese cuisine, salads, quiches, and sandwiches (along with some great desserts), attracting local workers, young intellectuals and media types. It offers outdoor seating in the cobbled esplanade and an impressive range of Portuguese and foreign newspapers.

CAFE VERSAILLES
Avenida da Republica, 15a, Uptown, Phone: 21 354 6340
It is worth getting on the Metro to the business district of Saldanha to visit this turn-of-the-century café and have a sweet pastry, hot chocolate, or coffee in its baroque interior. Crystal chandeliers, carved wooden panels, engraved mirrors, and stained glass decorate this grand space that is still relatively tourist-free, unlike the other historic cafes in the city due to its uptown location. Many locals consider it to have the best pastries in Lisbon.

CONFEITARIA NACIONAL
Figueira Square, Downtown, Phone: 21 342 4470
When it opened in 1829, this pastry shop was considered one of the most elegant in Europe. It has a bright mirrored interior with shiny marble counters, and remains a wonderful place for some glazed pastries. It is mostly famous for its Christmas time Bolo Rei, a traditional cake first introduced by the French.

DELI DELUX
(www.delidelux.pt) Avenida Infante Dom Henrique, Armazem B, store 8, Doca do Jardim do Tabaco, Alfama
Upon entering, you'll find a gourmet shop. A café is behind those aisles of shelves with fine Portuguese and international products, and outside the window are tables on an outdoor terrace facing the river.
This is one of the top spots for weekend brunch.

FABULAS
Rua Garrett, 19, Chiado
Hidden in a courtyard in Chiado, this is nonetheless one of the most popular cafés in the city. You'll see why as soon as you enter, with its wonderful mix of old furishings and list of reasonably-priced light meals. The atmosphere is young and laid-back.

KAFFEEHAUS
Rua Anchieta, 3, Chiado
Located just steps from Sao Carlos Theater, this Austrian-owned and Austrian-flavored café also serves light lunches and dinners. It stays open until midnight, while on Friday and Saturday nights it extends until 2AM. On Sunday mornings it's a good option for brunch. Naturally, the menu lists Austrian dishes, with daily specials highlighted in chalk separately, on the cabinet behind the counter.

PASTEIS DE CERVEJA
Rua de Belem 15-17, Belém, Phone: 21 363 4338
This café in the historical Belém district has a curious specialty - a sweet pastry made with beer. It originated in the 1920s, and although not as legendary as the Pasteis de Belem further down the street (see Antiga Confeitaria de Belem above), it has remained popular through the decades. If you're curious to try it, be prepared to feel more the taste of almond paste than beer. It may not be the most mouth-watering of pastries, but it's definitely something different to try.

PASTELARIA SUIÇA
Rossio Square, Downtown, Phone: 21 321 4090
This is one of the city's historic cafés, although you wouldn't be able to tell from the renovated, modernist interior and pre-pay system. It now serves mostly as a tourist café with tables on the pavement of both Rossio and Figueira Square behind it, but remains a good option for breakfast.

PÃO DE CANELA
Praça das Flores, 27-28, Principe Real, Phone: 21 397 2220
This friendly café with outdoor seating is one of the most peaceful in the city, located in a lovely square in the Principe Real district. It is named after the cinnamon stick that is used by locals to sweeten coffee, although it also serves light meals and snacks such as quiches and cakes.

POIS, CAFÉ
(www.poiscafe.com) Rua Sao Joao da Praça, 93, Alfama
Mismatched old furniture and a wide selection of international newspapers, magazines, and books invite you to lounge before or after a visit to one of Alfama's viewpoints or the castle.
Looking very much like a living room, this is a cozy place for brunch (it opens at 11 in the morning) or for a light meal. The salads and sandwiches are excellent, the cakes delicious, and the lemonade a must.
It is owned by a couple of Austrians, so expect to find several Vienna-inspired dishes on the menu.

PORTAS DO SOL
Miradouro das Portas do Sol, Alfama
Found on the rooftop of one of Lisbon's most stunning viewpoints, this terrace café makes you feel like you're at a resort, especially when loungy music is playing and the sun is shining. There is also an interior dining area but you'll surely sit outside admiring the views and enjoying a refreshing drink.

ROYALE CAFE
(www.royalecafe.com) Largo Rafael Bordalo Pinheiro, 29 Chiado
A modern café in a simple yet refined space that includes an inviting courtyard.
It has a laid-back atmosphere and serves organic light meals.
The "royale chocolate" or muffin covered in dripping chocolate (to which may also be added a scoop of ice cream) is already legendary among frequent customers.

SANTINI
Rua do Carmo, 9, Chiado
Ask anyone where is the best ice cream in town and they'll tell you it's here. You be the judge as you try the variety of flavors available. Be prepared to stand in line at any time of the day -- it's that popular.

TARTINE
Rua Serpa Pinto, 15, Chiado
This café is one of the few in Lisbon serving pancakes, however the specialty is Portuguese pastries, including its own original eggy "Chiado" cake. Bread is also sold to go at the counter by the entrance, while the spacious dining area is found upstairs.

VERTIGO CAFE
Travessa do Carmo, 4, Chiado
Decorated with mirrors and stained wood, this café may have a certain old-style feel, but the crowd is young and relaxed, and it serves light (many vegetarian) meals as well as teas. It is a great place to meet friends before going out at night for dinner or drinks in Bairro Alto.