Bar-hopping and dancing the night away 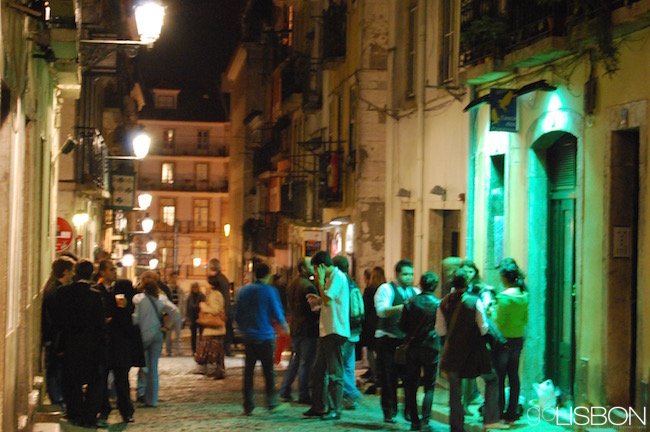 A sunset in Lisbon does not mean it's the end of the day (especially on a weekend or a typical summer night). For many, the day is just beginning, and many bars haven't yet even opened their doors.
A typical evening might start in the cafés of Chiado, serving as meeting points before heading to a restaurant for a long, relaxed dinner in the Bairro Alto quarter. It's the epicenter of the city's bar scene, and where most of the nighttime action takes place, together with the Cais do Sodré district closer to the waterfront, especially on the so-called "Pink Street".

Venues range from the relaxed to the trendy and quirky, and most close at 2am, when it's time to move closer to the river, to the clubs. Lisbon has gained a reputation as one of Europe's trendiest cities, and it's an established favorite with the international DJ set. The young European crowd has joined the party, with many young Spaniards, Italians, and Brits visiting the city specifically for the nightlife. It caters to everyone, offering everything from house to electronica, to 1920's-style jazz bars, to a flourishing gay scene.

For some local flavor, spend a candlelit evening at a Fado House, ranging from elegant restaurants to downmarket taverns with live Fado performers. Many have lost their authenticity, and are targeted at tourists (clustered in Bairro Alto), but there are still some genuine Fado establishments in Alfama. Fado remains a lively part of the city's culture, and is a must for any first-time visitor.

The major concert venues are Altice Arena and Coliseu dos Recreios, often hosting some of the world's top bands and artists. For other cultural events, check out the extensive program of Belem Cultural Center, and consult the monthly Follow Me Lisboa guide provided by the tourism office, listing all the major happenings in the city.

To know exactly where to go, see our selection of the city's best bars, clubs, and Fado Houses.

Where to Stay if you're a Night Owl

Want to have your bed within walking distance of bars and clubs? Stay here:

HOTEL DO CHIADO
Go up the hilly street from outside this hotel and you have all the cafés of Chiado and the bars of Bairro Alto.

HOTEL BORGES
Simple hotel but with one of the best locations in town, above Café Brasileira, the starting point for a night out in Bairro Alto.

Stay at one of the modern apartments in Bairro Alto or Chiado.