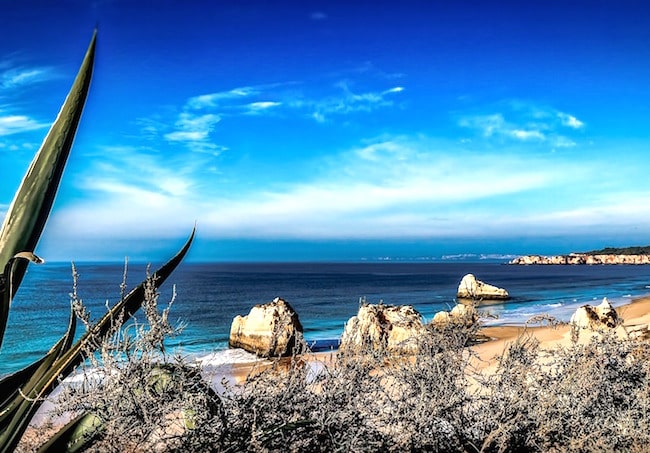 With some of Europe's most beautiful beaches, some of the continent's top golf courses, magnificent cliff scenery, fantastic grottoes, and warm year-round climate, it was inevitable that Algarve, Portugal's southernmost province, would become the country's most popular travel destination. Almost completely destroyed by the 1755 earthquake, it has less cultural attractions than other parts of the country, but its scenic beauty more than makes up for it.

Most visitors to Portugal go to Algarve, and many of them don't leave their resorts to explore more of the country. The reasons are the beaches and views of extraordinary beauty, the year-round sunshine, and its sports and leisure activities. However, there are also historic towns like Faro, Sagres (known as "the end of the world" before the Age of Discovery), and Lagos, all well worth exploring.

The beaches are among the best and cleanest in Europe, with no fewer than thirty of the country's 100-plus European Union "Blue Flag" beaches.

Central Algarve or the coastline between Faro and Lagos can get quite crowded in the summer, but even there, among the villas, hotels, and sports complexes, it is still possible to find vestiges of traditional Portugal in the narrow whitewashed streets and relative peace and quiet in the cove beaches.

Shut off by hills in the north, Algarve developed on its own and has a climate (more typically Mediterranean) and scenery very different from the rest of Portugal.

That, together with it having been the last territory to be conquered from the Moors, gives it a unique identity. It has always been seen as a separate land from the rest of the country, reflected in the official title of Portugal's kings, "King of Portugal and the Algarve," from the 13th century to the end of monarchy in 1910.

The Phoenicians and the Greeks were the first to establish colonies in the area, followed by the Carthaginians and the Romans. They were then followed by the Visigoths who controlled the region for the next 300 years, and the Moors who dominated for the next five centuries. Egyptians settled mostly around Faro, elsewhere included Persians, Syrians, and Berbers from Morocco.

Some of the most special features of Algarve are reminders of their presence, from the latticed chimneys, to the white domed buildings, to the almond trees, to place names beginning with "Al" -- Algarve derives from Al Gharb, meaning "the West".

Christian forces reconquered the land in the 13th century, and two centuries later it played an important role in the Age of Discovery, when Prince Henry the Navigator established a pioneering navigation school in the town of Sagres. The goal was to extend the field of knowledge in cartography and navigation, with ships built in Lagos, from where several expeditions were launched.

Today these shores are not a point of departure, but a place where thousands arrive every year drawn to the sandy beaches and their abundance of extraordinary rock formations, intriguing Moorish heritage, and exotic scenery.

The entire region is a delight to visit all year round, and even near popular resorts it is still possible to escape crowds. It is easy to get around, with towns and villages connected along the entire coast by good main roads and a train line.

In the sections below is information on all that Algarve has to offer, starting at the Spanish border and ending on the west coast, with some side trips north for the most attractive inland towns.

WHERE TO GO in Algarve

These beaches stand out for their beauty, cleanliness, or seclusion


Top 10 PLACES to Visit in Algarve

Find the best hotels for you in Albufeira, Faro, Lagos, Vilamoura, and elsewhere in Algarve!