Lagos and Sagres - Swimming at the End of the World 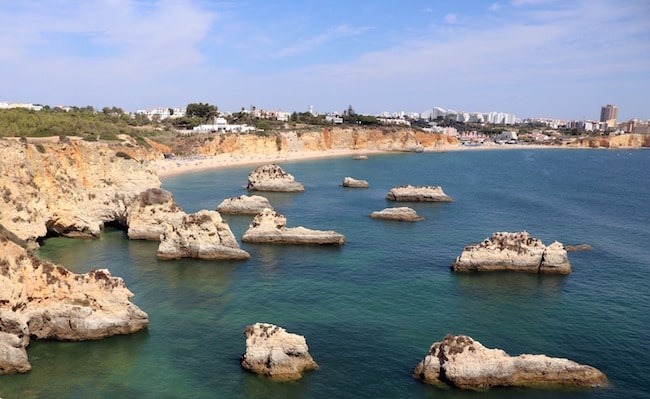 LAGOS was the point of origin for many voyages during the Age of Discovery, and is now one of Algarve's liveliest historic towns and with some of the region's finest beaches.
Prince Henry the Navigator made it his headquarters, and his statue faces the harbor in a square where his palace once stood before it was destroyed in the Great Earthquake of 1755. Much of the 16th century city walls remain intact, and standing before them is a statue of Gil Eanes, the explorer who left Lagos in 1434 to become the first to round Cape Bojador off northwest Africa, then the limit of the known world.

Within the walls are cobbled pedestrian streets with shops, restaurants, and cafes, and Santo Antonio Church, with an extraordinary interior made up of superb Baroque carving and tiles. Adjoining the church is the Regional Museum with an interesting and varied collection of archeological finds and religious art.
On the seafront is a 17th century fort containing a small exhibition about the Age of Discovery, and affording views of the town and bay.
But above all, Lagos' main attractions are its beaches. The closest beach is Meia Praia but even more splendid is Dona Ana Beach, with soft sand and rocky islets lying offshore. From there, it is possible to walk to Ponta da Piedade, a spectacular site not to be missed, with undoubtedly the most beautiful rock formations in the Algarve coast. A boat trip around this coast is highly recommended.
Heading west, there are some small fishing villages still relatively untouched by tourism, such as Luz, Burgau, and Salema.


SAGRES, at the southwestern tip of Europe, is one of Algarve's most historical sites and a place of romantic pilgrimage.
Prince Henry the Navigator built a fortress and a shipyard here, much of it destroyed (along with his precious library) first in an English attack in 1587 and later in the 1755 earthquake. It is believed that it was on this site that Prince Henry gathered the most renowned astronomers, geographers, cartographers, and shipbuilders of the time to study the sea and the sky to launch his expeditions. Among the explorers who studied at Sagres were Vasco da Gama and Ferdinand Magellan. An enormous pebble wind compass 43m (141 ft) in diameter thought to have been used to teach navigation is still clearly visible on the ground, and a simple but captivating 15th century chapel on the site are both believed to have been built by Henry.
Overlooking this exhilarating site is a modern pousada, where guests can end their day with a fabulous sunset.
Nearby is Cape São Vicente, mainland Europe's most southwesterly point, known to ancient mariners as the "End of the World," where it was believed the sun sank into the ocean every night. The awe-inspiring sight, standing on the 60m-high (200ft) cliffs fronting the immense Atlantic, can still make it feel that way today. The lighthouse has a 95-km (60 mile) range, the most powerful in Europe.
There are good beaches around Sagres, such as Praia da Mareta (just below the main square), Praia do Martinhal (ideal for windsurfing), Praia do Tonel, and the isolated Praia de Beliche, although the waters on this coast are cold when compared to those in Eastern Algarve.


On the west coast north of Sagres, on the border between Algarve and Alentejo, is ODECEIXE, a Moorish village with an excellent beach sheltered by high cliffs. Although popular with surfers, it remains uncrowded even in the summer, making it one of Algarve's best-kept secrets.

Central Algarve - From Faro, to the luxury resorts, through vibrant Albufeira, to inland villages
Eastern Algarve - From the Spanish border, to lovely Tavira, to sandy islands