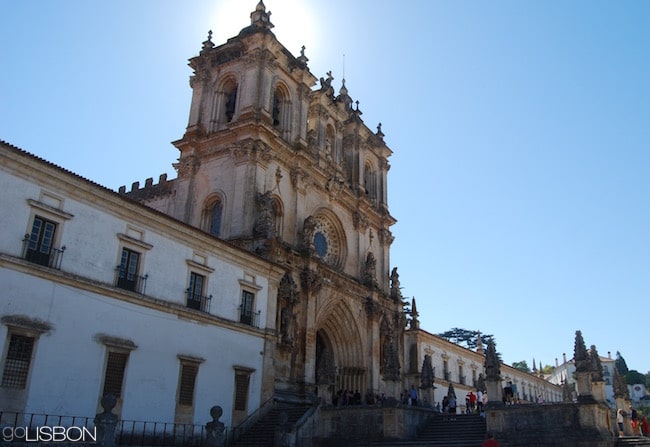 Alcobaça is known for its principal attraction, the Abbey of Santa Maria. Founded in 1153 to commemorate a victory against the Moors, it was finally completed in 1223. It is now Portugal's largest church, and one of its outstanding architectural monuments.

It was declared a World Heritage Site by UNESCO, and its excellent state of preservation makes it the finest example of Cistercian architecture in Europe (it is also the continent's largest building of the Cistercian order).

Basically Gothic in structure, it contains five cloisters, seven dormitories, a library, and a huge kitchen.

The abbey church is far more impressive inside than out. Much of its original Gothic façade was altered in the 17th and 18th centuries, leaving only the main doorway and rose window unchanged. The Baroque façade was built in 1725 with two low towers and numerous statues. Inside, the nave is a breathtaking 106m long, with huge pillars and truncated columns. Around the choir are nine chapels and the high altar is surrounded by eight columns.

In the transepts are the sumptuous, richly carved tombs of King Pedro I and his beloved Inês de Castro, a testimony to one of Portugal's great love stories. In the transept chapels are 17th-century painted terracotta figures of monks and a fine 17th-century ceramic sculpture of the death of St. Bernard.

To the east of the ambulatory are two fine 16th-century Manueline doorways adorned with exotic foliage and elaborate pinnacles. On the west side of the south transept is the Sala dos Tumulos, a funerary chapel containing a number of tombs. On the north side of the church are the medieval monastic buildings.

A doorway in the north aisle leads into the beautiful two-storey Cloisters of Silence, dating from the 14th century. On the north side stands the Gothic fountain-house, while off the northeastern corner of the cloisters is the 18th-century Sala dos Reis (King's Room), so called because statues of practically all the kings of Portugal line the walls. Below the statues are tiles from the 18th century depicting the founding of the abbey.

Nearby is the grand kitchen, described by 18th-century traveler William Beckford as "the most distinguished temple of gluttony in all Europe." It is 18m (60ft) high, with a huge open fireplace and a fish-tank. The adjacent refectory, huge and vaulted, is where the monks ate in silence while the Bible was read to them from the pulpit. Opposite the entrance is a 14th-century bathroom embellished with a hexagonal fountain.

Besides this outstanding building, the small town of Alcobaça has little else that stands out besides being a center of a porcelain and pottery industry. There are many shops around the central square, and some factories welcome visitors.

It is a good idea to combine Alcobaça with a visit to Batalha, 20Km (12.5 miles) to the north.

Alcobaça Abbey was declared a World Heritage Site because:

"Its size, the purity of its architectural style, the beauty of the materials and the care with which it was built make this a masterpiece of Cistercian Gothic art."

FIND ALCOBAÇA HOTELS »
OR
GO ON A TOUR FROM LISBON »