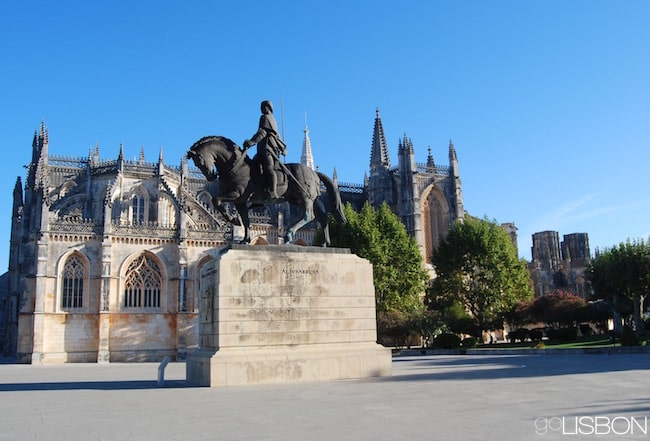 Batalha's abbey is one of Europe's greatest Gothic masterpieces and is protected as a World Heritage monument.
It was built in 1388 after King João I made a vow to the Virgin that he would build a magnificent monastery if she granted him a victory over the Castillians in the Battle of Aljubarrota. An equestrian statue of Nuno Alvares Pereira, the king's commander at the battle, stands before the southern façade.

The exterior possesses innumerable pinnacles, buttresses and openwork balustrades above Gothic and Flamboyant windows, while the front portal is decorated with statues of the apostles in intricate Gothic style.

In the vast Gothic interior are 16th-century stained-glass windows of exceptional beauty, and in the Founder's Chapel are the tombs of King João, his queen Philippa of Lancaster, and of their younger sons, including Prince Henry the Navigator.

The Royal Cloisters were first built in Gothic style in the late 1380s, but Manueline embellishments were added a century later. Typical Manueline symbols such as plants and flowers of the newly discovered lands and other seafaring motifs carved in every arch illustrate the variety and excitement of Portuguese art during the Age of Discovery.

The Chapter House guards the Tomb of the Unknown Soldiers, where the bodies of two casualties of World War I lie. The vaulting is an outstandingly bold feat (an unparalleled example of the Gothic style), rising to a height of 20m (60ft) without intermediary supports -- only condemned criminals were used to build it.

A magnificent Gothic doorway almost 15m (50ft) high with Manueline decoration gives access to the roofless Unfinished Chapels, perhaps the most astonishing part of Batalha. Seven chapels radiate from an octagonal rotunda, divided from each other by deeply carved incomplete pillars that create an effect of oriental exuberance. The massive buttresses were designed to support a dome that was left unfinished.

South of Batalha is PORTO DE MÓS, a small town with a distinctive 13th-century castle and underground caves nearby at Mira de Aire. The castle, which was once used as a fortified palace but was severely damaged in the 1755 earthquake, has green cone-shaped turrets and an exquisite loggia.
The well-illuminated caves have bizarre rock formations and curiously shaped dripstones, and imaginative and descriptive names like "Hell's Door", "Jewel Room", "Jelly Fish", and "Church Organ". There is an excellent 45-minute guided tour that culminates in a natural lake 110m underground.

Go on a Batalha tour on a daytrip from Lisbon!

Batalha Abbey was declared a World Heritage Site because:

"The Monastery of the Dominicans of Batalha was built to commemorate the victory of the Portuguese over the Castilians at the battle of Aljubarrota in 1385. It was to be the Portuguese monarchy's main building project for the next two centuries. Here a highly original, national Gothic style evolved, profoundly influenced by Manueline art, as demonstrated by its masterpiece, the Royal Cloister."