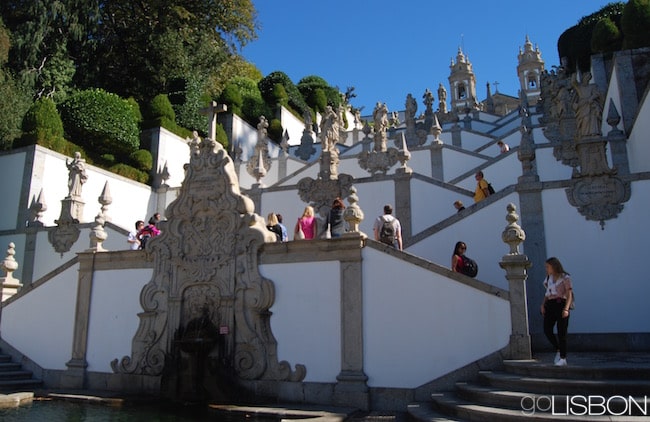 Braga is one of the most beautiful cities in Portugal, with a number of impressive Baroque monuments, including one of the country's best-known sights, the Bom Jesus Sanctuary.

Founded by a Celtic tribe called Bracari and later occupied by the Romans (who made it the administrative center of Gallaecia, or present-day Minho and Spanish Galicia), it became the seat of a large archbishopric and the country's religious capital in the 11th century.

Today it is a modern city with a young population, bustling with commerce and industry surrounding a lively and attractive old center with a number of pedestrian streets.

The broad main square, Praça da Republica, with fountains and arcaded buildings, connects the old and the new city. Most of the sights are within walking distance, including the city's fine old churches (there are about three dozens of them) and the splendid cathedral (the country's oldest).
Begun in 1070, its has an extraordinary diversity of styles, including Romanesque, Gothic, Manueline, and Baroque, all somehow coming together harmoniously. In the richly decorated interior is a baroque double organ -- a masterpiece dripping with gold and adorned with cherubs and sea creatures.
Across the cloister is the 14th-century Kings' Chapel containing the tombs of Henry of Burgundy and his wife Teresa, whose son, Afonso Henriques, was Portugal's first king.
Stairs by the cloister lead up to the treasury, showcasing a rich collection spanning eight centuries of masterful craftsmanship, including a 10th-century ivory casket, and an iron cross used by explorer Pedro Alvares Cabral in 1500 to celebrate the first ever Mass in South America, in newly-discovered Brazil.

Near the cathedral is the former Archbishop's Palace, a huge fortress-like building begun in the 14th century and enlarged in the 17th century. Now occupied by the municipal library, it is visited for its immaculate Santa Barbara Gardens dating from the 17th century.

The most distinctive of all the other religious monuments is perhaps the Capela dos Coimbras, with a flamboyant Manueline tower and an interior with tile panels depicting the story of Adam and Eve.

In the neighboring Municipal Square is the Town Hall, worth a look for one of the country's best Baroque façades, and a lovely Baroque fountain where the water spouts from a pelican and bronze cupids.

Another impressive façade is that of Casa do Raio, a Rococo building covered in blue tiles, located behind the Baroque Hospital de São Marcos, which includes a church and an imposing 18th century façade.

Also interesting is Museu dos Biscaínhos, the municipal museum housed in a 17th-century aristocrat's palace and surrounded by a garden full of statuary and a fountain. Its attractive collection includes Roman relics, pottery, and furniture.

Five kilometers (3 miles) east of the center is the spectacular Bom Jesus Sanctuary, one of the masterpieces of European baroque. A twin-towered neoclassical church built in 1784 sits on top of a marvelous Baroque staircase lined with chapels representing the Stations of the Cross, the Stairway of the Five Senses, and the Stairway of the Three Virtues, or the spiritual journey of believers, who must overcome their senses and attain the three virtues of Faith, Hope and Charity in order to gain salvation.
Visitors can take an old-fashioned funicular to the top, but it's best to climb the monumental stairway to appreciate the symbolism and the architecture.

Another popular sanctuary nearby is Sameiro, a late 19th-century domed church with a vast panorama over Minho. Also worth a look is Santa Maria Madalena Church, another 3km (2 miles) down the same road, built in 1750 with an unusual ornate Rococo exterior, on which there is not one single straight line.

Also noteworthy is São Frutuoso Chapel, one of Portugal's oldest buildings, about 3km (2 miles) north of the city. It was originally built by the Visigoths in the 7th century in the form of a Greek cross, and is one of the few remaining examples of pre-Romanesque architecture.

The best time to visit Braga is during Easter, when for an entire week the city blazes with lights and there is a torchlight procession of hooded participants.

The tourism office provides more information about this and other events, and explains how to get to the attractions surrounding the city.

WHEN TO VISIT: Although it makes a good base to explore the province of Minho (especially if you are relying on public transportation), Braga can be visited on a daytrip from Porto or elsewhere if you are short on time. With only one day to see the city, the two sights not to miss are the Bom Jesus Sanctuary and the Cathedral.

FINDING ACCOMMODATION: If you are visiting Braga during Holy Week and would like to stay overnight, it is best to seek accommodation well in advance.

NEARBY: When in Braga, don't miss the country's first capital nearby, the World Heritage city of Guimarães.