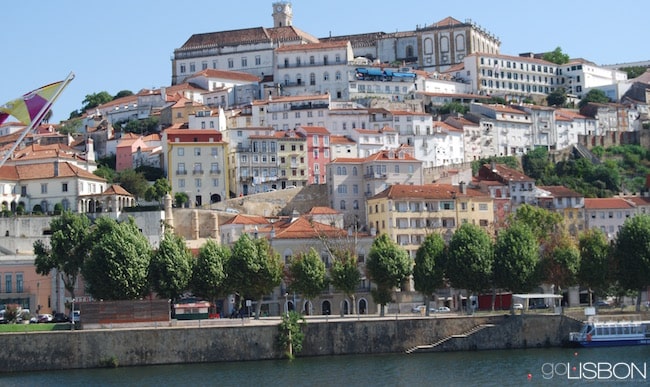 Coimbra is one of Portugal's oldest cities (it already was an important municipality in Roman times) and is home to one of the world's first universities.

It was the capital of the country from 1139 to 1256, and its university was founded in 1290. Today this impressive university is still one of the world's most illustrious and the city's biggest attraction.
Surrounding it in the old town (called "cidade alta" or "upper town") are fine old churches and narrow streets standing on a hill overlooking the Modego River.

Down by the river is "Baixa" (downtown), the commercial heart of the city, with lively cafes, pastry shops, restaurants, boutiques, and other shops leading to Comercio Square. In a corner of this square is the Church of São Tiago, with a plain 12th-century façade, but in its interior is an exuberant Rococo alterpiece in gilded wood.

On another square nearby is the historic Santa Cruz Monastery, containing the tombs of Portugal's first two kings. It was founded in 1131, but its flamboyant arch at the entrance dates from the 18th century. Inside is an ornate pulpit and the elaborate tombs of the kings, as well as impressive cloisters in the Manueline style, designed in 1524.
The choir stalls were carved in 1518 with a frieze on the theme of exploration, showing Portuguese ships. A former auxiliary chapel next to the church is now a café. It is a great place in which to relax, with a high-vaulted Manueline ceiling, stained-glass windows, and wood paneling.

At the back of the church are the Manga Gardens, which have a bizarre domed and buttressed fountain symbolizing the fountain of life.

Not too far, at the end of the wide Sá da Bandeira Avenue is a delightful garden, the "Jardim da Sereia," also known as Santa Cruz Park. Built in the 18th century, its entrance is through two towers adorned with arches, and a staircase with tile-covered benches leads to a fountain decorated with statues. This is a great place for a picnic (there are tables for that), with a lake surrounded by sculpted boxwood and exotic trees creating an atmosphere of peace and quiet amid the city.

The entrance to the ancient, upper town (once both a Jewish and Moorish quarter), is through the Arco de Almedina, a 12th-century gateway to the city, back by one of the city's main shopping streets, Rua Ferreira Borges. Steps lead up to the Torre de Anto, a 16th-century tower that now houses an arts and crafts gallery. Here are also houses called "Republicas" where the university students live, just as they have for centuries. Close by are the two cathedrals - the Old Cathedral ("Sé Velha") and the New Cathedral ("Sé Nova"). The fortress-like Old Cathedral was built in the 12th century in the Romanesque style. Inside the highlights are a number of fine tombs, a large Late Gothic altar, and a Renaissance font. From the south aisles, a flight of steps leads up to the Early Gothic 13th-century cloister.

The New Cathedral has a misleading name, since it was founded in 1598 by the Jesuits. It has an Early Baroque façade and inside are baroque altars, a 17th-century organ, and barrel vaulting.

Overlooking the Old Cathedral is the Machado de Castro National Museum, housed in an attractive former bishop's palace, which would be worth visiting in its own right even if it were empty. This is one of the country's most important collections of 14th- and 16th-century sculpture, containing several magnificent limestone pieces, including the Gothic Virgin & Child by Master Pero. The collection of paintings and ceramics is also impressive, especially the 16th- and 17th-century Flemish and Portuguese paintings. Another interesting part of the museum is Criptoportico de Aeminium, a maze of underground Roman passages containing a dramatic collection of Roman sculpture, Visigothic artifacts, and earlier discoveries. 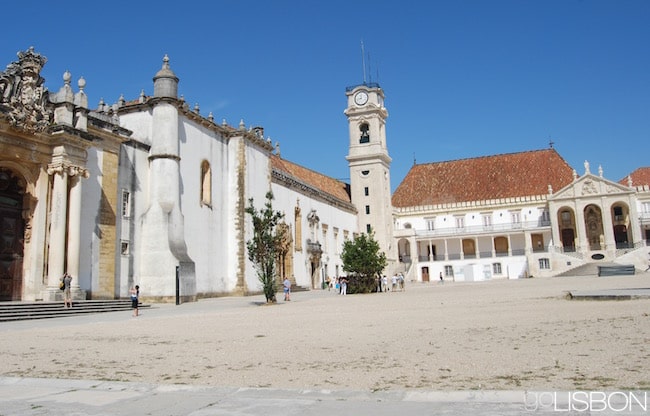 The museum is just steps from the old University. Entering through the 17th-century "Porta Ferrea" ("Iron Gate"), one finds a courtyard known as "Patio das Escolas". On the north side is the actual Old University buildings, on the east is the observatory, and on the west is the small University Church. Built between 1517 and 1552, the church has a 33m (110ft) high tower, and an adjacent museum of sacred art. Inside the church itself is a Mannerist altar, tiles decorating the ceiling, and a dazzling organ.

Most impressive of all is the baroque library, one of the world's most resplendent. It was built in the early 18th century with rooms rich in gilt and exotic wood, and lined with 300,000 books.

Down the steps from Dom Dinis Square by the entrance to the university, and under a 16th-century aqueduct, is the entrance to the Botanical Gardens, Portugal's largest, created in 1772. There is a combination of flowerbeds (a remarkable collection of some 1200 plants, including many rare and exotic species), meandering paths, and elegant fountains. The 19th-century mansion nearby is the House-Museum of Bissaya Barreto, who was a local surgeon. The house was converted into a museum with Portuguese sculpture and painting, Chinese porcelain, old tiles, period furniture, and more.

Back at the lower town, it is possible to walk across Santa Clara Bridge from Portagem Square to admire the view of the old city from the other side of the river and to visit a number of other historic sights. First are the ruins of the Gothic Convent of Santa Clara-a-Velha, founded in 1286 and gradually destroyed by the flooding of the river. Eventually it became necessary to build a new convent, so the Convent of Santa Clara-a-Nova was built in 1649. Inside this rich Baroque convent is a silver tomb of Queen Saint Isabel, installed in 1696 and a large cloister built in 1733.

Nearby is the Portugal dos Pequeninos Theme Park, a miniature village established in 1940, with reproductions of the country's most important buildings and of typical houses and buildings from the former colonies. A short distance beyond is a little park, the Quinta das Lagrimas, the setting of one of the world's most celebrated and tragic love stories -- it was where Inês de Castro was murdered (see "Curious Fact" below). The 18th-century mansion on the site is now a hotel.

A memorable place to eat is "Zé Manel dos Ossos." Entering this hole-in-the-wall restaurant in a back alley (Beco do Forno, 12) close to the landmark Astoria Hotel, feels like invading someone's home. There are just a few simple wooden tables and chairs, but the inexpensive home-style food seems to please everyone. The walls are plastered with the odd and eccentric, including messages in different languages written by visitors from around the world.

Coimbra likes to think of itself as a big city, but although it is in fact big on history, it really is a provincial town, especially during the summer months when the university's students have left the city. But it does remain a proud atmospheric city throughout the year, and is an enjoyable stop in the center of Portugal. It can be reached easily by train from Lisbon and Porto.

The tragic love story of Pedro and Inês
Although he was in love with Inês de Castro (a Galician noblewoman), Pedro, son and heir of King Afonso IV was obliged to marry Princess Constanza of Navarre. When Constanza died, he went to live with Inês in Coimbra, but the king disapproved and wanted to put an end to the affair. Believing that her family was a potential threat to the Portuguese throne, he had her murdered in Coimbra's Quinta das Lágrimas in 1355. When the king died, Pedro succeeded to the throne and took revenge on the two killers by having their hearts torn out. Revealing that he had married Inês in secret in Bragança, he had her corpse exhumed and crowned. The court was forced to acknowledge her as queen by kneeling before her on the throne and kissing her decomposed hand. Their tombs are now in Alcobaça's abbey, where, at Pedro's wish, they are placed foot to foot so that when they arose on the Day of Judgement, the two lovers would immediately see each other. Both tombs carry the inscription "Até ao fim do mundo", "until the end of the world."
This dramatic story of love and revenge has been an inspiration to a number of writers and poets in Portugal and elsewhere in Europe.

Getting Around: Most of Coimbra's sights are within walking distance, and the city is best appreciated on foot, but the old town is very steep -- wear comfortable shoes.

Best time to visit: The best time to visit is during the "Burning of the Ribbons" festivities in May, when the university graduates ceremoniously burn their gowns and ribbons to mark the end of the academic year. This is also the best time to listen to Coimbra Fado, which differs from that of Lisbon, sung only by male university students and with more romantic and intellectual lyrics.

Staying in Coimbra: If you're driving between Lisbon and Porto, Coimbra may be visited in a quick stop for a few hours. But if you'd like to take a Portugal tour at a slower pace, stay in Coimbra overnight. Search for the city's available hotels here.

River cruises: There are river trips in the summer months from a jetty in the park beside the Santa Clara Bridge on the north bank.

Daytrips: When in Coimbra, don't miss the Roman ruins in Conimbriga, among the finest to be seen in the Iberian Peninsula.