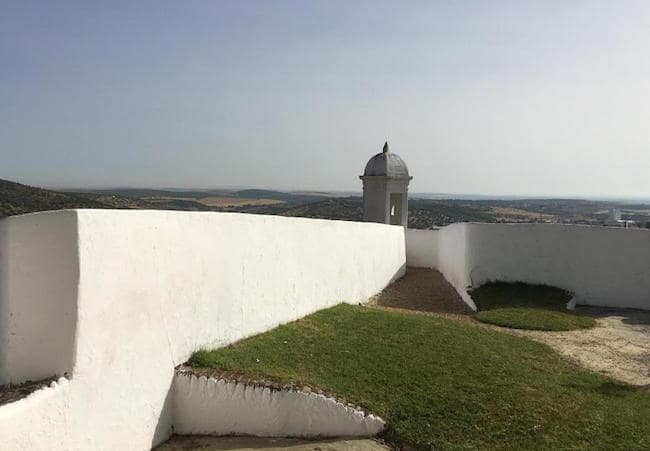 Elvas is one of the greatest and most heavily fortified frontier towns in Europe, with military fortifications that are among the most sophisticated and best preserved in the continent (they've been given World Heritage status).
Sitting just 12km (7.5miles) from the border with Spain, 17th century star-shaped fortifications with gates, curtain walls, moats and bastions surround the town, along with two fortresses.

A good place to start a tour of the narrow streets of the old town is the beautifully paved Republica Square. At the top of the square is the 16th-century Manueline-style Church of Nossa Senhora da Assunção with blue and yellow tiles decorating the nave and sacristy. Behind it is the octagonal Church of Nossa Senhora da Consolação built on the plan of a Templars' church. Unremarkable from the outside, its interior is extraordinary, with painted marble columns and fantastic 17th century tiles lining the walls.

Nearby is a tiny triangular "square," Largo Santa Clara, with a splendid 16th century Manueline marble pillory with four metal hooks to which prisoners were shackled, and a 10th century archway beneath a loggia built by the Moors leading to the ruined castle. Also built by the Moors, it offers a panoramic view of the town, its fortifications, and the countryside.

On the opposite end of town is the Municipal Museum, packed with local treasures, including Neolithic remnants, Roman mosaics, old weapons, and religious paintings.

Also in the city center (on Rua da Cadeia) is the surprising MACE, a museum of contemporary art.

Lying outside the city walls is the city's most famous sight, the towering Amoreira Aqueduct, 7km (4.5miles) in length that took over 100 years to complete. With a total of 843 arches, and at places rising to over 30m (100ft), it still brings water to town.

Buses arrive in the center of town from Lisbon and Evora.