A legendary miracle and outstanding pousadas 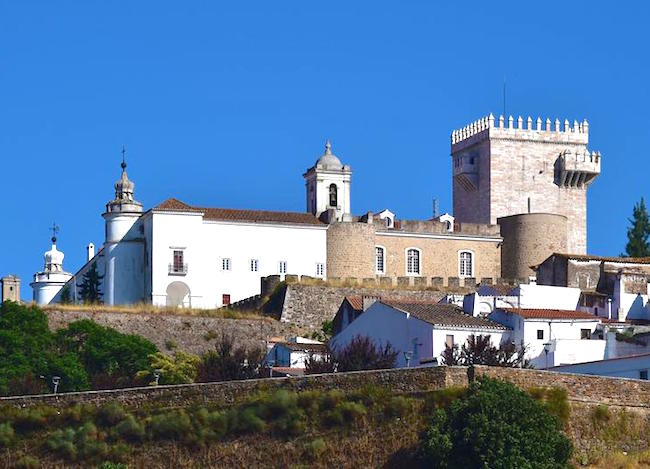 Estremoz is the largest of the Alentejo's "marble towns." The old, upper part of town is crowned by a castle founded in 1258, now converted into one of Portugal's best pousadas, the residence of King Dinis and his wife Queen Saint Isabel in the early 14th century. Visitors don't have to stay at the pousada to take a look around the room in which she died, which has been converted into a small chapel adorned with tiles and paintings depicting scenes from her life and the story of the "Miracle of the Roses" -- the king disapproved of her giving alms to the poor, so Isabel hid the bread she was carrying for them in the folds of her skirt. When the suspicious king asked her to show him what she was carrying, the bread had miraculously turned into roses.

A marble statue of the queen now stands on the castle terrace. It is worth visiting the wonderful 13th century keep, also entered via the pousada, where there's a breathtaking view of the town and the plains beyond from the top platform. Opposite the keep is the Municipal Museum with a collection of local pottery and religious works of art.

In the lower town is Rossio Marquês de Pombal, the large unpaved main square which is a marketplace of huge dimensions surrounded by marble façades of churches, cafes, and the Rural Museum that displays locally-produced artifacts. The Saturday market that takes place here (one of Portugal's biggest) is known for its local earthenware pottery and cheese.

Buses arrive daily from Evora, including express services that take about one hour, so the town can be visited on a daytrip, but a stay in the luxurious pousada is highly recommended as one of Portugal's most memorable experiences.

Another highly-recommended pousada is in ARRAIOLOS, southwest of Estremoz. It is a town overlooked by the ruins of a Moorish castle that actually dates back to Celtic times, but it's mostly famous for its carpets that originated with the Moors and were later inspired by Persian and Indian designs during the Age of Discovery. Many of them now cover Portugal's most famous houses and palaces, and although they are sold throughout the country, the biggest bargains are found in many of Arraiolos' shops. The pousada is in a 16th-century convent that is extraordinary for combining historic and modern design.