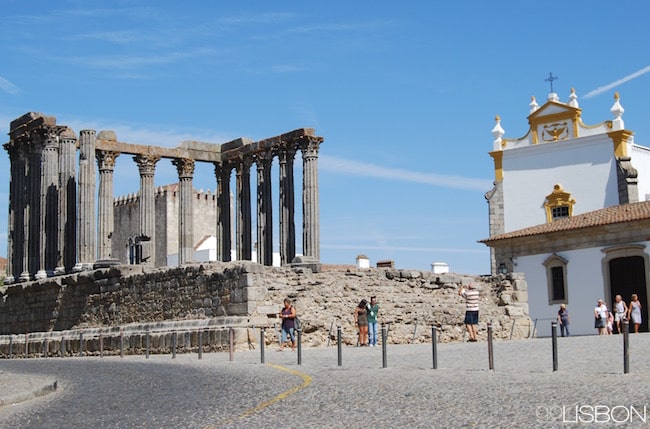 Evora is one of Portugal's finest and most delightful towns. It is a true open-air museum with a large number of wonderfully-preserved monuments and buildings of public interest that led UNESCO to protect it as a World Heritage Site.

Each age has left its trace on Evora. It was the Celts who named it Ebora and the Romans gave it its most famous landmark, the Temple of Diana. Dating from the 2nd century, it is one of the Iberian Peninsula's best preserved Roman monuments, raised on a 3m (10ft)-high stone platform, with 14 of the original 18 granite Corinthian columns still standing. The whitewashed houses, arches, and twisting alleyways that characterize the town reflect the Moorish presence.

The main square, Praça do Giraldo, is the best place to start a visit. It was an execution ground during the Inquisition, but is now filled with shops and cafés, and surrounded by attractive townhouses with wrought-iron balconies. A fountain erected in 1571 in front of the Renaissance Santo Antão Church dominates one end of this spacious square.

From there, the pedestrian Rua 5 de Outubro (lined with souvenir shops) leads to the Roman temple and Loios Convent. The convent is now a splendid pousada but anyone can visit its Gothic church founded in 1485. 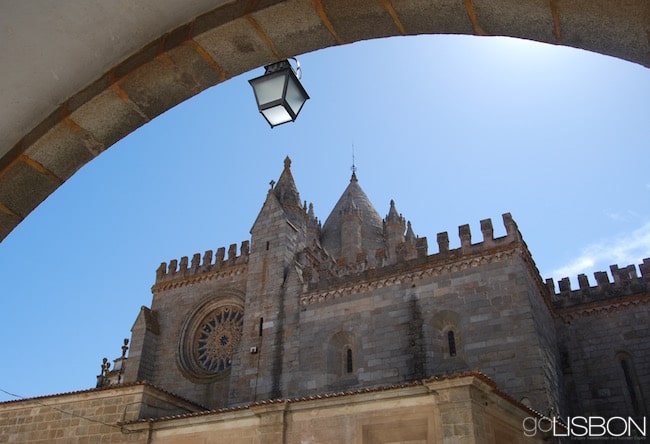 The towers of the Sé (cathedral), built in 1186 (and where the flags of Vasco da Gama's ships were blessed before his voyage to India), are seen from here. It is a blend of Romanesque and Gothic, and on the portal are 14th century sculpted Apostles. The Gothic interior has one of the longest naves found in any cathedral in the country, measuring 70m(230ft), and has a large Renaissance organ, thought to be the oldest in Europe. The Gothic cloister with statues of the Evangelists and the Sacred Art Museum are worth seeing. Its most precious item is a 13th century ivory Virgin whose body opens out to reveal intricately carved scenes of her life in nine episodes. Visitors can also climb up to the roof for a view over the town.

Adjacent to the cathedral is the Evora Museum, representing Evora's long history through Roman columns, 16th-century paintings, and modern sculpture. Among the paintings is a 15th-century Holy Virgin with Child by Alvaro Pires (he is one of the earliest identified Portuguese artists although a number of his paintings are displayed in Pisa and Florence in Italy).

A short walk behind the cathedral leads to the Jesuit University, founded in 1559. It has elegant Renaissance marble cloisters and the classroom entrances are decorated with tile panels representing each of the subjects taught.

A staircase beside the cathedral leads down towards Porta da Moura Square, a picturesque place to rest. It is surrounded by Moorish architecture and has an interesting spherical Renaissance fountain dating from 1556.

As you walk around town you will come across some interesting churches. One of the most eye-catching is Graça Church, a Renaissance building that is unique in the Iberian Peninsula. Built in granite, it has four huge figures supporting globes.

But of all the churches, the one that should not be missed is the Church of São Francisco. It is a Manueline-Gothic structure completed around 1510, and legend has it that Portuguese navigator Gil Vicente is buried in it. Not buried, but on display, are the bones and skulls of some 5000 people covering the walls and columns of the church's Chapel of Bones. The creepiest sight is what looks like the desiccated corpse of a child, hanging off to the right of the entrance, where a sign reads "Nós ossos que aqui estamos, pelos vossos esperamos," meaning "We bones that are here, await yours."

After that, it is a good idea to take a little break in the delightful public gardens near the church, which are also home to the 16th-century Dom Manuel Palace. Built in Gothic, Manueline, neo-Moorish, and Renaissance styles, it was where Vasco da Gama received his commission to command the fleet that would discover the sea route to India.

Outside the city walls on the road to the train station is Ermita de São Brás ("Hermitage of St. Blaise"), an extraordinary building that looks like a medieval castle, complete with large battlements, gargoyles, and round buttresses. It was built in 1485 in thanksgiving for survival from the plague.

Also outside the walls is the magnificent Silver Water Aqueduct. Walk west from Giraldo Square along Rua do Cano to transverse it and take a look at the houses that were built into its arches.

Around Evora are also numerous prehistoric monuments -- dozens of sizeable Neolithic menhirs, cromlechs, and dolmens (the one in Zambujeiro, now a national monument, is the largest in Europe, consisting of seven stones, each 6m/20ft high, forming a huge chamber).

The Cromlech of Almendres dating from somewhere between 4000 and 2000 B.C has been called "the Portuguese Stonehenge." It is the most important megalithic group in the Iberian Peninsula, consisting of a huge oval of almost one hundred rounded granite monoliths, some engraved with symbolic markings, assumed to have been used for cult purposes. They have their origins in a culture that flourished in the Iberian Peninsula before spreading north as far as Brittany and Denmark.

A couple of kilometers east is the Cave of Escoural, a cave adorned with charcoal drawings of horses and other animals, the work of Cro-Magnon artists some 15,000 years ago. There are free tours organized on the site.
For more information about these sites, how to get to them, or to book tours, visit the Evora Tourism Office.

One of Evora's restaurants is also famous throughout the country. Apparently O Fialho's excellent traditional dishes are reason enough to drive all the way from Lisbon for dinner.

Evora is less than 2 hours away from Lisbon (there are express buses departing from the Sete Rios terminal), so it is a possible daytrip from the capital. However, it makes an ideal base for touring the Alentejo region and an overnight stay is highly recommended, as the town is especially evocative when floodlit at night.

Evora was declared a World Heritage Site because:

"This museum-city, whose roots go back to Roman times, reached its golden age in the 15th century, when it became the residence of the Portuguese kings. Its unique quality stems from the whitewashed houses decorated with azulejos and wrought-iron balconies dating from the 16th to the 18th century. Its monuments had a profound influence on Portuguese architecture in Brazil."


FIND EVORA HOTELS »
OR VISIT EVORA ON A TOUR FROM LISBON »