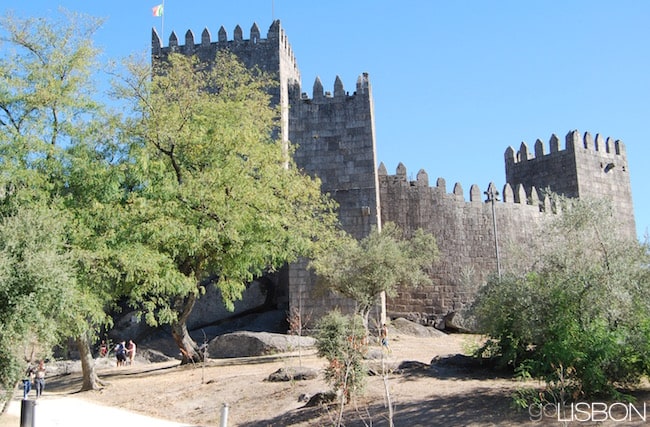 As the first capital of the nation and birthplace of its first king, Guimarães is one of Portugal's most historic cities, and its World Heritage medieval streets with well-preserved monuments make it one of the most attractive places to visit in the country.

The imposing medieval castle, with eight crenellated towers 28m (92ft) high, was built in the 10th century to protect the population from attacks by the Moors and the Normans. It was then extended to its present size in the 12th century by Afonso Henriques, the first king of Portugal, who was baptized in the small Romanesque chapel next to the castle.

Across from the chapel is the Palace of the Dukes of Bragança, built in the 15th century as a medieval palace, with 39 unusual brick chimneys showing strong Northern European influence. It was used as recently as a few decades ago during the Salazar dictatorship as an official residence for the president. Inside is an impressive banqueting hall with a splendid wooden ceiling, and an extensive collection of portraits, furniture, carpets, and porcelain dating mainly from the 17th and 18th centuries.

Among the several churches in Guimarães, the finest is São Francisco Church on the south side of the city gardens. Built in 1400 in Gothic style, it was restored in the 18th century and features a series of magnificent tiles and an elegant Renaissance cloister and fountain.

From the castle, the beautiful cobbled Rua de Santa Maria has remained essentially unchanged for centuries, and leads down into the heart of the old town, where there are superbly restored historic buildings. One of those buildings is the former 16th-century Baroque convent of Santa Maria, now serving as the City Hall.

At the end of the street are two delightful squares with outdoor cafes and balconied houses, Praça de Santiago and Largo da Oliveira. At Largo da Oliveira is the old Town Hall and the Church of Nossa Senhora da Oliveira, with a Gothic shrine erected in 1340 standing before it. There are many legends about its origins, but a popular story says it marks the legendary spot where Wamba, elected king of the Visigoths, refused his title and drove a pole into the ground swearing that he would not reign until it blossomed, and it then sprouted immediately.

In the church's Romanesque cloister is the Alberto Sampaio Museum, exhibiting some outstanding religious art. The biggest treasures are a tunic worn by João I in the Battle of Aljubarrota in 1385 and a silver altarpiece reportedly taken from the defeated Spanish king.

Another noteworthy collection is that of Martins Sarmento Museum, consisting of fascinating finds (from jewelry to Lusitanian granite warriors) from the Celtic settlement of Citania de Briteiros.

Citania de Briteiros was inhabited from about 300BC to 300AD and its ruins were discovered in 1875. This fascinating archeological site is open to visitors (also easily accessible from Braga), with the foundations of more than 150 stone huts, with two of them having been restored to show their original appearance. Objects unearthed in the excavations such as fragments of painted pottery, carved stones, weapons, and jewelry, are also on display in a museum dedicated to these Iron Age settlements called "castros" in the village of Briteiros, not too far from Guimarães. If you visit the site, don't miss this museum, as well as Guimarães' Martins Sarmento Museum.

To experience medieval Guimarães, visit the city in the first week of August for a festival of medieval art and costume. The three-day celebration dates from the middle of the 15th century, and includes a torchlight procession and a medieval parade.

It is possible to visit the city on a daytrip from Porto or Braga, but it is worth staying at the pousada in town. The award-winning hotel is a 12th-century monastery set on a hill overlooking the city, with an elaborate rococo façade.

Guimarães was declared a World Heritage Site because:
"Guimarães is of considerable universal significance by virtue of the fact that specialized building techniques developed there in the Middle Ages were transmitted to Portuguese colonies in Africa and the New World, becoming their characteristic feature. The early history of Guimarães is closely associated with the establishment of Portuguese national identity and the Portuguese language in the 12th century. An exceptionally well-preserved town, Guimarães illustrates the evolution of particular building types from the medieval settlement to the present-day city, and particularly in the 15th-19th centuries."