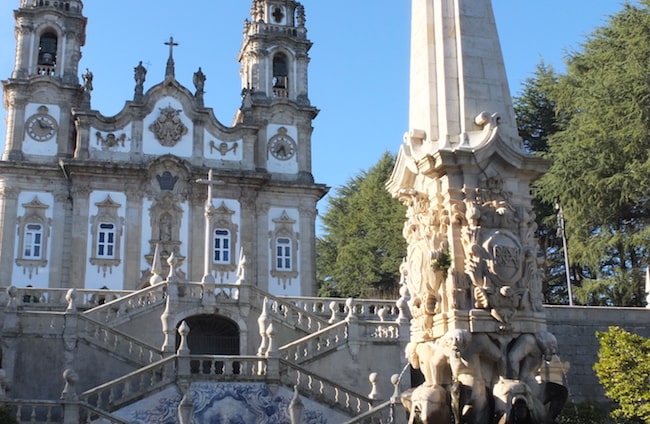 Lamego is an attractive town with Renaissance and baroque mansions overlooked by two hills. On one of the hills are the ruins of a 12th-century castle, on the other is the monumental baroque Sanctuary of Nossa Senhora dos Remédios. A marvelous granite staircase decorated with tile panels, allegorical fountains, small chapels, and statues, leads to a baroque church with views over the town.

There's an annual pilgrimage to the site on September 8th, as part of a festival that starts at the end of August consisting of torchlight processions, a fair, concerts, and dancing.

The most significant moment in the town's history was in 1143, when nobles declared Afonso Henriques to be Portugal's first king. The town's Gothic cathedral was built by him, although only the Romanesque tower is left from the original building, with its carved Renaissance portal and fine cloister dating from the 16th and 18th centuries.
The 12th-century castle preserves a fine keep and a very old and unusual cistern with monograms of master masons.

The town museum, one of the country's best regional museums, is housed in an 18th-century Bishop's Palace. It includes huge 16th-century Flemish tapestries depicting mythological scenes and works by the great 16th-century Portuguese artist Grão Vasco, showing the Creation, Annunciation, Visitation, and Circumcision.

Just outside the town is the tiny 7th-century São Pedro de Balsemão Chapel, a lovely Visigothic chapel believed to be the oldest in Portugal and second oldest in Europe.

Vineyards surround Lamego, and its Raposeira sparkling wine is among the best in Portugal.
There are daily bus services linking the town to Porto and Viseu.

Southeast of Lamego is the town of PENEDONO, overlooked by a graceful fortified castle. The view from the parapet walk extends all the way to the Serra da Estrela mountains, and a rare octagonal pillory from the 16th century stands by the entrance.

North of Lamego is Miradouro da Boa Vista, a belvedere with a magnificent view of the spectacular World Heritage DOURO VALLEY, the world's oldest legally defined wine-producing region. As a local saying goes, "God created the Earth and man the Douro", with a dramatic landscape on the steep banks of the river created over centuries of cultivation made up of carefully terraced vineyards dotted with white villas, many of which welcome visitors.

The world-renowned wine has two important production centers in the valley, at Pinhão and Peso da Régua. Traditional rabelos (square-sailed and flat-bottomed boats) once used to ship wine down the river can still be seen in Pinhão, while from Régua, as the town is usually known, there are fine views.

The best way to appreciate the region is to take a cruise from Porto and staying at a beautiful hotel with spectacular views of the valley and river.

The Douro Valley was declared a World Heritage Site because:
"Wine has been produced by traditional landholders in the Alto Douro region for some 2,000 years. Since the 18th century, its main product, port wine, has been world famous for its quality. This long tradition of viticulture has produced a cultural landscape of outstanding beauty that reflects its technological, social and economic evolution. It is an outstanding example of a traditional European wine-producing region, reflecting the evolution of this human activity over time."

Nearby is the CÔA VALLEY ARCHEOLOGICAL PARK, created in 1992 when an extraordinary Stone Age art gallery was discovered extending for 17km (10 miles) along the Côa River valley. The sensational find is the biggest ever made in Europe, with the site having been protected over the years by the valley's resistant schist bedrock and Mediterranean microclimate.

New discoveries of carvings dating back to tens of thousands of years are still being made on the site, with depictions of horses, deer, and extinct creatures. These carvings are unique in Europe for being the only examples outside rather than inside caves, and today the park encompasses the largest known array of open-air Paleolithic art in the world.
Also containing rock art from the Neolithic, Bronze, and Iron Ages, the area became a World Heritage Site in 1998, and is accessible by guided tour. The best and most accessible tour is in Penascoso, containing extremely well preserved and vivid depictions of horses.

A pleasant little town closest to the archeological site is Vila Nova de Foz Côa, with a remarkable 16th-century parish church and pillory that are classic examples of the Manueline style, but the main reason for a stop is to arrange a tour at the Archeological Park Office and to visit the Côa Museum.

The Prehistoric Rock Art in the Côa Valley was declared a World Heritage Site because:
"This exceptional concentration of rock carvings from the Upper Palaeolithic (22,000-10,000 B.C.) is the most outstanding example of early human artistic activity and of the sudden flowering of creative genius at the dawn of human cultural development in this form anywhere in the world. The Côa Valley rock art throws light on the social, economic, and spiritual life on the life of the early ancestor of humankind in a wholly exceptional manner."