A romantic royal palace outside Lisbon 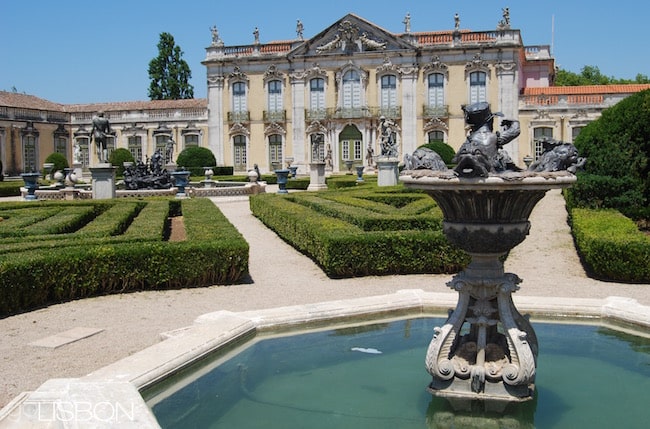 It is definitely worth taking a half-day trip to Queluz from Lisbon or Sintra for its magnificent royal palace. The town is an unremarkable suburb, but its Versailles-like palace is the country's finest example of Rococo architecture. Lying on the Sintra train line, it is reached after a 10-minute walk, turning left out of Queluz-Belas station and following the signs. The pink palace is located in a cobbled square, with a statue of Queen Maria I and the former Royal Guard building (now serving as a pousada) facing it.

It was first built in the 17th century as a manor house for King Pedro II, but was later enlarged and transformed into a graceful palace. Today it is well preserved and open to the public, while also often accommodating state guests and dignitaries (former U.S. presidents Eisenhower, Carter, Reagan, and Bill Clinton all stayed or dined here).
In the summer months it also hosts classical music concerts (part of the Sintra music festival) as well as equestrian shows. 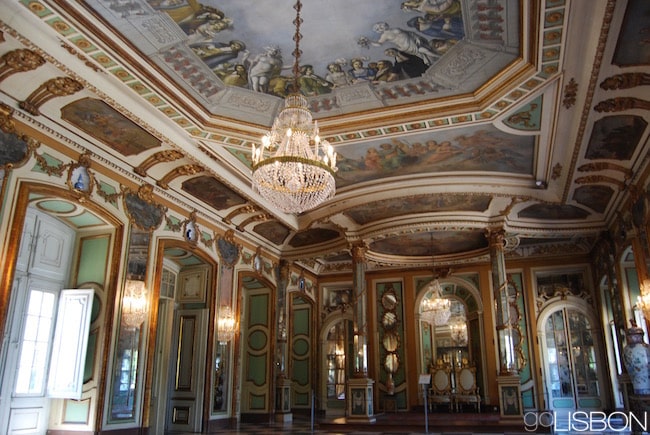 One of the highlights inside is the grandiose but elegant Throne Room, once the scene of splendid balls and banquets, lined with mirrors and adorned with crystal chandeliers and gilded statues. Beyond is the Music Room, where the queen's orchestra ("the best in Europe", according to English traveler William Beckford) performed operas and concerts.

Also noteworthy is the royal bedroom, a square room with stunning murals of Cervantes' "Don Quixote," a domed ceiling, and a floor decoration in exotic woods giving it a circular appearance.

The Ambassadors' Room is just as outstanding, with a marble floor and a ceiling painting of the royal family attending a concert.

English and French-style furniture, fine porcelain, and Arraiolos carpets fill the other rooms.

The original kitchen is now a restaurant called Cozinha Velha, and retains the old stone chimney, arches, and vaulted ceiling. It is celebrated for its desserts, many of which are based on ancient convent recipes.

The beautiful formal gardens overlooked by the Rococo façades are adorned with elaborate statues and fountains with themes of classical mythology. The azulejo-lined canal is where the royal family went boating.

Go on a tour of Queluz Palace from Lisbon!

Queen Maria I, resident of the palace in the late 18th-century, was an intelligent and brave woman, but went hopelessly mad when her son died from smallpox in 1788. Visitors to the palace were often dismayed by her agonizing shrieks as she suffered visions and hallucinations. She never recovered and her younger son João eventually took her to Brazil after the French invasion in 1807.