Dolphin-watching by a busy port and sandy beaches 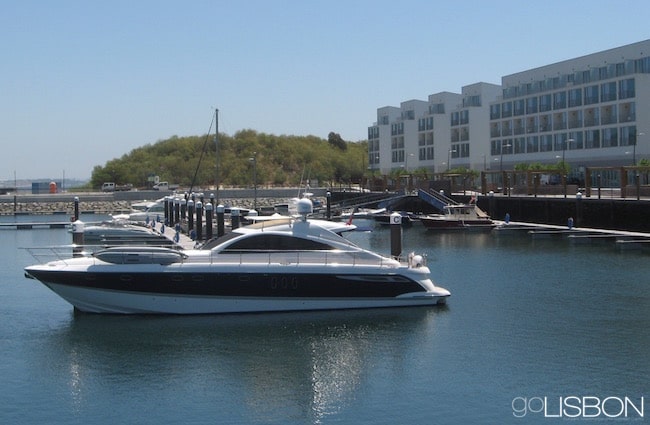 According to legend, Setúbal was founded by Tubal, the son of Cain. Today, it's an industrious fishing city and the country's third largest port.
Away from the industrial sprawl there's an attractive old town with pedestrian streets and squares filled with shops and cafes.

Off the main square ("Praça do Bocage," named after a local 18th-century poet described by William Beckford as "perhaps the most original poet ever created by God"), is the 16th-century Church of Saint Julian. It has fine 18th-century tiled panels and gilded altar decorations, but the city's architectural treasure is the striking 15th-century Gothic-Manueline Church of Jesus.

Designed by the same architect as Lisbon's Jeronimos Monastery, it is recognized as the earliest example of Manueline architecture, and Hans Christian Andersen described it as "one of the most beautiful small churches I have ever seen."

Of particular interest are the flamboyant doorway, the main chapel, and six extraordinary stone pillars shaped like coils of rope. In the Gothic cloisters of the church is the City Museum, with remarkable 16th-century paintings of the life of Christ, antique tiles and coins, and a rich collection of ecclesiastical gold and silver.

Another noteworthy church is the 13th-century Church of Santa Maria da Graça at the east end of the old town, with carved and gilded altars from the 16th and 17th centuries.

There's also a star-shaped 16th-century fort on a hill overlooking the port. It can be fascinating to watch the harbor from here as the brightly painted boats arrive in the morning loaded with fish and as fishermen mend their nets. Also worthwhile is visiting the lively fish auction.

Opposite the city is Troia, an immense strip of fine sand well connected by a ferry departing from the port. The northern end of the peninsula is heavily developed and includes an exceptional 18-hole golf course by Robert Trent Jones Sr. On the southern end there are miles of glorious empty beaches, great stretches of dunes, and a pine forest.

Nearby is Cetobriga, the remains of what started as a Celtic village and eventually became a Roman town that was destroyed by a tidal wave in the 5th century. Excavations have revealed scant ruins of tanks, thermal spas, and the remains of a temple decorated with frescoes.

East of Setúbal is the Sado estuary, an extensive reserve with a diverse bird life of over 100 species throughout the year. Worth looking out for are the flamingos and the white storks. Setúbal's tourism office can provide details of organized tours, as well as for watching bottle-nosed dolphins in their natural habitat.

North of Setúbal is PALMELA, a small hill town with a 12th-century castle that in its day was a splendid example of medieval military architecture. It is now a luxury pousada with fantastic views all around.

Setúbal can be reached by hourly trains from Lisbon (from the stations of Roma-Areeiro, Entrecampos or Sete Rios) or buses departing from the Sete Rios terminal, with a journey time of around one hour.