Portugal's fairytale town on the edge of Europe 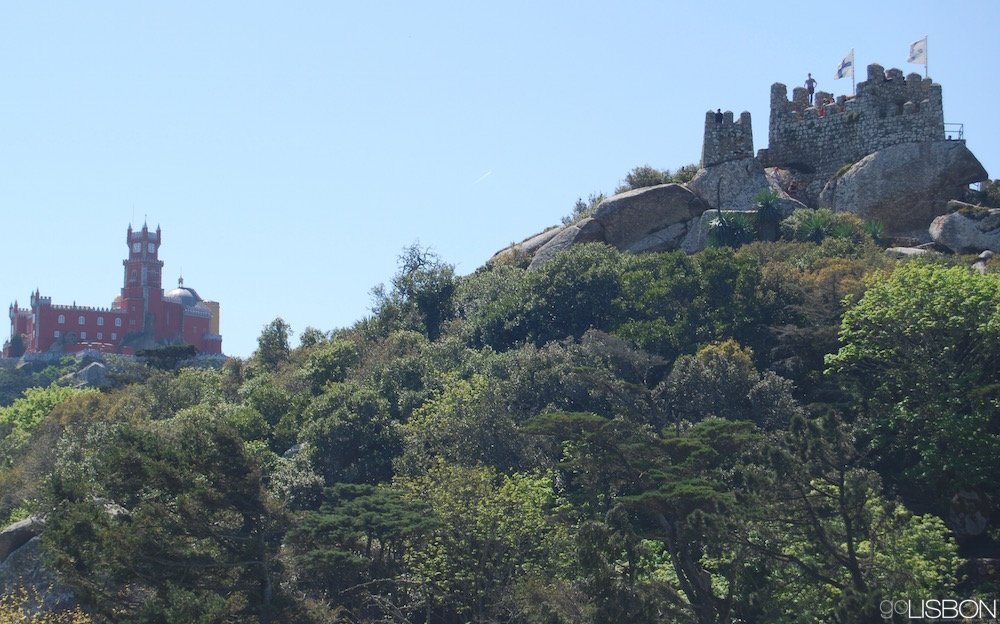 Sintra and its mystical hills dotted with fairytale palaces and extravagant villas have bewitched visitors for centuries. The Romans made it a place of cult moon worshiping, and named it "Cynthia" after the goddess of the moon. They were followed by the Moors, who also fell in love with the lush vegetation and built a hilltop castle, a palace, and several fountains around town. Later it became the summer residence of the Portuguese royal family, and attracted a number of wealthy aristocrats who built huge mansions and villas.

Famous British poet and traveler Lord Byron stopped by in the 18th century, writing that the town is "perhaps in every respect the most delightful in Europe," and calling it a "glorious Eden" in his epic poem Childe Harold's Pilgrimage. His fellow countryman Robert Southey followed him and saw it as "the most blessed spot on the whole inhabitable globe." Others made it their own private retreat, such as William Beckford (one of 18th century England's wealthiest men), who lived in the splendid Monserrate Palace, later bought by Francis Cook.

It's indeed an extraordinary place, with a surreal mixture of history and fantasy, protected by UNESCO as a World Heritage Site. Its fairytale palaces, incredible vistas, and notable museum collections, make it a destination you should make the effort to see, especially if you visit Lisbon.

It's easy to reach from the capital, just a 30-minute drive on the IC19 highway, although taking the train is really the best option. Parking spots are scarce, and it's better seen on foot. The train ride takes about 40 minutes from Rossio Station in the center of Lisbon. 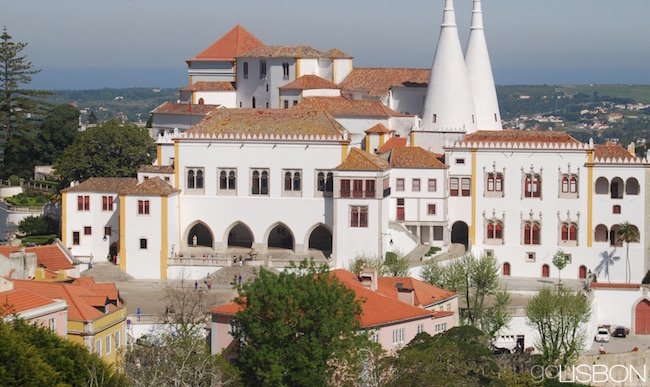 In the main square is the National Palace, dating from the 14th century. Its two gigantic conical chimneys are the town's most recognizable landmarks, while the rest of the building is a combination of the Moorish, Gothic and Manueline styles. Inside it possesses what is said to be the most extensive collection of Mudejar azulejos (colored glazed tiles) in the world, and several exceptional rooms. The Sala dos Brasões ("Coat-of-Arms Room") stands out for its domed ceiling decorated with stags holding the coats of arms of 74 Portuguese noble families and for its walls lined with 18th-century tiled panels. The former banquet hall, Sala dos Cisnes ("Room of the Swans"), also has a magnificent ceiling, divided into octagonal panels decorated with swans painted in the 17th century. Other highlights include the "Magpie Room" (named for the birds that decorate the ceiling), the Royal Chapter of King John I, the huge kitchen with a capacity for 1000 diners, and the interior courtyards where poet Camões read his verses to the king. 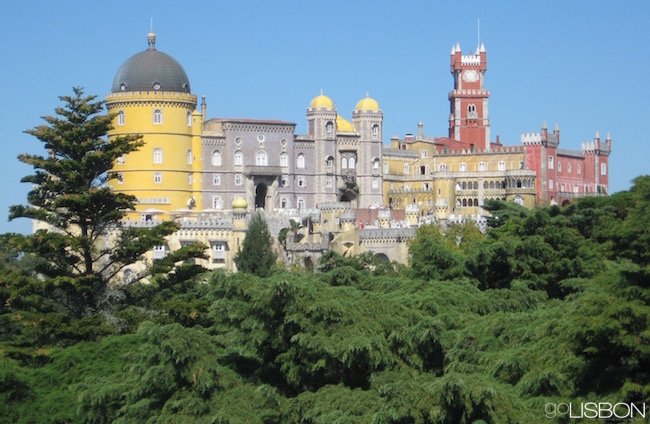 But the most famous building in Sintra is Pena Palace. Built in the 1840s, it's one of Europe's most fantastic palaces, often compared to Neuschwanstein and the other mock-medieval castles of Ludwig of Bavaria in Germany, although it was actually built more than two decades before those. It includes a drawbridge, a conglomeration of turrets, ramparts, and domes, and a gargoyle above a Neo-Manueline arch, all washed in an array of pastel shades. The extravagant interior is decorated in late Victorian and Edwardian furnishings, rich ornaments, paintings, and priceless porcelain preserved just as the royal family left them. Other highlights include the spacious ballroom, the marvelous "Arab Room", and an impressive 16th-century chapel altarpiece (part of an original convent founded to celebrate the first sight of Vasco da Gama's returning fleet).


Surrounding the palace is the mystical Pena Park, filled with a variety of trees and exotic plants from the former colonies of the Portuguese empire, ponds, fountains, and black swans. There is also a charming lodge hidden among the trees that can be visited. At the highest point is a statue of King Ferdinand looking towards his palace, and a viewpoint called "Cruz Alta" overlooking Pena Palace and surroundings.

A number of luxurious old villas are scattered around the park. The most famous (for being part of the setting of Roman Polanski's "The Ninth Gate" starring Johnny Depp) is Challet Biester, with dark conic rooftops and Gothic windows. 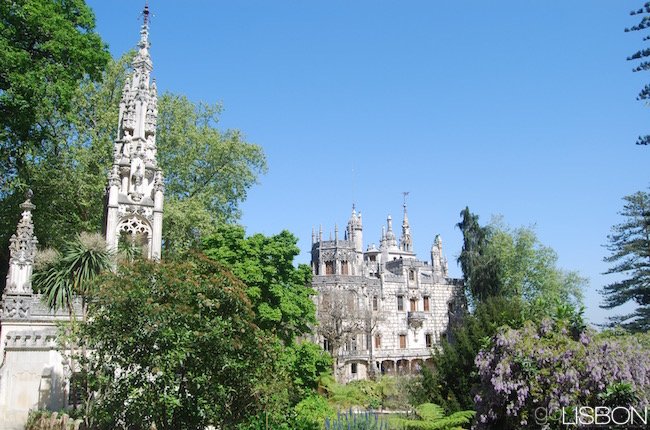 Another remarkable building is the fantasy "Palace of the Millions," part of the Regaleira estate, or Quinta da Regaleira. Built at the close of the 19th century, in Gothic, Manueline and Renaissance styles, it sprouts turrets and towers. It's surrounded by a garden filled with mythological and esoteric symbols -- statues of gods, mysterious wells, ponds, and grottoes. The highlight is an almost supernatural tunnel staircase that symbolizes death leading into a "Garden of Eden," symbolizing "rebirth" or the entrance to Heaven. You are free to look around unguided, although the option of a guided tour is worth taking to get the full flavor of the place.

Almost opposite Regaleira is the elegant 18th-century Seteais Palace. A superb arch joins the palace's two wings, which were restored in 1955 and turned into a luxurious hotel with rooms containing crystal chandeliers, murals and antique furnishings. From the gardens is a magnificent view of the surrounding countryside and Pena Palace. 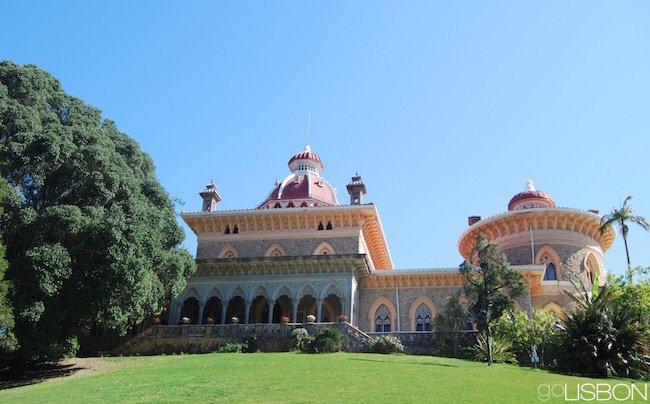 Further down the road is the exotic Monserrate Palace and its romantic subtropical gardens. This palace was bought by Francis Cook and rented by William Beckford, and now stands as a museum. It combines the Gothic and Moorish styles with some Italian inspiration (the dome was modeled on the Duomo in Florence), and the gardens are a fabulous dreamscape of waterfalls and flora ranging from roses and conifers to tropical tree ferns, and at least 24 species of palms.


Contrasting with all of these fabulous palaces is the tiny but extraordinary Capuchos Convent. Visiting its labyrinth of narrow corridors, chapels, and child-sized cells cut out of rock, all lined with cork, is an Alice-in-Wonderland experience. The cork, used to keep out the humidity and to favor the acoustic isolation required for the meditation of the friars, has given it the nickname of "the cork convent." 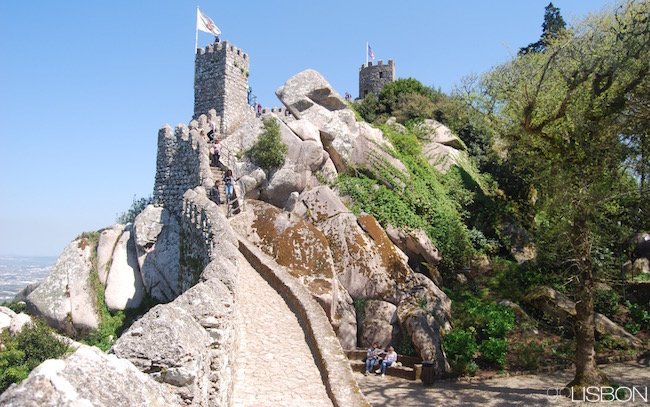 Overlooking it all is the 8th century Moorish Castle, standing on top of Sintra's highest hill. Snaking along the mountain ridge, it offers breathtaking views of the area.


To reach the Moorish Castle and Pena Palace, take bus 434 that runs every 30 minutes from behind Sintra's train station. When you return to the center of town and admire all the palaces (including the palatial Town Hall), don't overlook the museums. Don't miss the News Museum, right around the corner from the Town Hall, telling the history of the last century through the biggest headlines.

As you walk around Sintra you will encounter a number of natural fountains that have been given striking decorations. Two of the most eye-catching are the Moorish Fountain, so called for its Neo-Moorish decoration and geometrical tile patterns, and the Sabuga Fountain, where the water spouts from two breasts. Stop for a drink after all the sightseeing or to wash down a sweet Queijada de Sintra, a local specialty. It's a cheese tart spiced with cinnamon, available at most cafes and pastry shops in town, but the most popular place to sample them is at "Casa da Piriquita," an inviting café with a warm atmosphere just around the corner from the National Palace.

It's easy to visit Sintra (and the palace of Queluz nearby) on daytrips from Lisbon, but those who choose to experience the town's magical atmosphere at night, can stay at the historical Lawrence's Hotel. It's the oldest hotel in the Iberian Peninsula and where Lord Byron stayed during his visit (you can book it here). 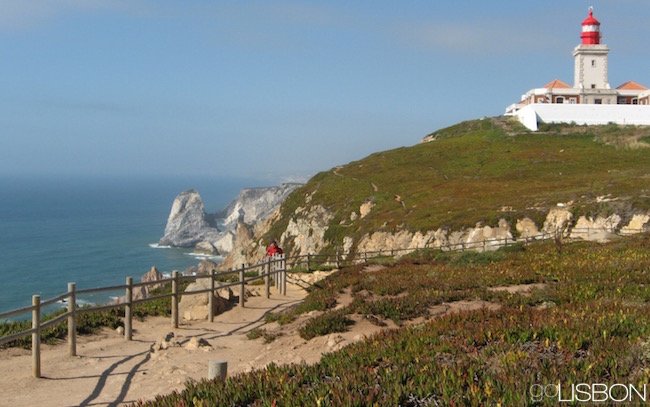 There are more popular attractions outside Sintra, such as Cabo da Roca, a cliff rising about 140m (460ft) above the Atlantic, famous for being Europe's westernmost point (to reach it take bus 403 from behind the train station). Overlooking this dramatic sight is a lighthouse and a landmark cross bearing an inscription by Portuguese poet Luis de Camões stating that, here, "land ends and the sea begins." A tourism office on the site provides visitors with a certificate stating that they have visited the most westerly point of Europe.

To the north are some of the best beaches on the Lisbon coast -- the unspoiled Praia da Adraga (one of Europe's top 20 beaches according to the BBC), the wide Praia Grande, and lively Praia das Maçãs (easily reached by a fun 19th-century tram). Nearby is Azenhas do Mar, an attractive fishing village with splendid views, a natural rock seashore swimming pool, and white houses tumbling down the cliffs that drop to the sea.

Sintra also has excellent sports facilities, including tennis, golf, and horse riding. The upmarket Penha Longa Resort is one of the most famous in Portugal. Designed by Robert Trent Jones with superb views towards the sea, it has hosted the Portuguese Open.

End your sight-seeing back in the center of Sintra with a horse-and-carriage ride around town. After experiencing its almost unreal mixture of extravagance, fantasy, and natural beauty, you will find that you too weren't immune to the spell of this truly enchanting real-life Garden of Eden.

Although most people visit Sintra on a day trip, that's not enough time to see all of the palaces and other attractions. You may want to stay overnight, which also allows you to experience its even more magical atmosphere when most tourists are gone. Take a look at the available Sintra hotels »

In order to avoid the long lines at the palaces, and to see more of the attractions in just one day, consider going on an organized tour. Take a look at the available tours to Sintra »

How to get to Sintra

Trains depart around every 20 minutes from Lisbon's Rossio Station. Sintra is the last stop, and the journey time is 40 minutes. You ride the train for free with the Lisboa Card.