A royal retreat and marble extravagance 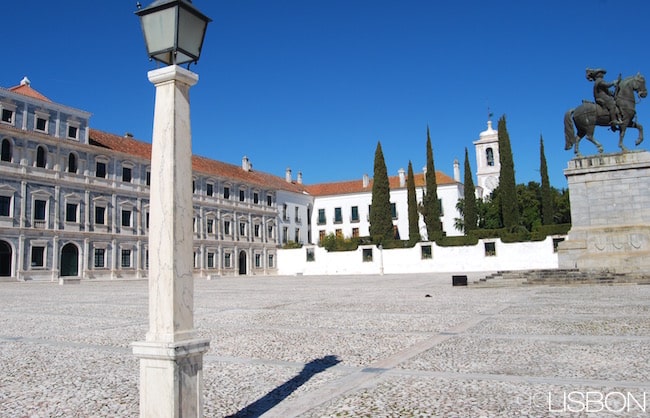 Everything around Vila Viçosa's peaceful broad streets lined with orange and lemon trees seems to be made of marble. Benches, pavements, framing of windows and doorways, and even the toilets in the bus station are made of this shining "white gold," the local marble from the enormous quarries outside the town.

Dominating Terreiro do Paço, the vast main square, is the long marble façade of the three-story Royal Palace that belonged to the Bragança dynasty. It was the birthplace of Catherine of Bragança (who later became the queen of England) in 1638, and King Carlos spent his last night here before his assassination in Lisbon in 1908. Inside is a rich mixture of English, Flemish and French tapestries, Chinese porcelain, Brazilian ebony furniture, and massive kitchens with 2000 kg of gleaming copper, with some pots and pans large enough to bathe in, and spits large enough for several oxen. There is also an armory filled with weapons and suits of armor, and a Coach Museum occupying the Royal Stables. The entrance to the royal hunting ground is through an eye-catching "knot gate," with great ropes and knots carved into stone.

In front of the palace stands an equestrian statue of King João IV and an Augustinian convent with a richly decorated interior, containing the tombs of the Dukes of Bragança. Their spouses are in the 16th century Chagas Convent in the same square, today a pousada.

The ruins of a lovely medieval castle nearby contain a modest archaeological museum on the first floor, and afford views of the royal hunting ground.

Vila Viçosa can be reached by bus from Evora or Estremoz, and is easily visited on a daytrip.

The town can also be visited on a tour from Lisbon.