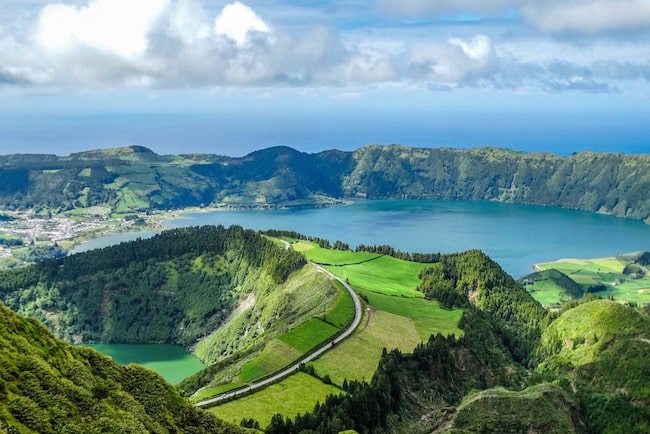 Situated in the middle of the Atlantic, off the coast of Europe, the nine islands of the Azores is home to a variety of landscapes and spectacular volcanic scenery. They are a popular destination for whale watching and for travelers who enjoy having one of the most offbeat travel experiences in Europe, walking and appreciating nature.

Discovered by the Portuguese in 1427, these islands became one of the axes of navigation between Europe, Asia, and America during the 16th and 17th centuries. Christopher Columbus, returning from his momentous 1492 voyage to the New World, first stopped in the island of Santa Maria before reaching mainland Europe in Lisbon.
The name Azores was given by Gonçalo Velho Cabral who, with Diogo Silves, landed in Santa Maria in 1427. They mistook the many buzzards there for hawks, which are called "açores" in Portuguese.

According to legend, the islands are part of the lost Atlantis, the mythical sunken empire.
Settlement began in 1439 when Prince Henry the Navigator offered land to Flemish farmers. He thought the islands could be productive and profitable, and organized the planting of wheat and sugar cane. Hardy islanders today still live by farming and fishing, and there's a significant dairy industry.

One of the Azores' newspapers, "O Açoreano," is the third oldest in Europe and from its nine islands have emerged many fine poets, novelists, and philosophers of Portuguese culture.

SÃO MIGUEL is the largest of the nine islands, known for an enchanting natural wonder, the Sete Cidades twin lakes. In the sunlight, one lake is blue and the other is green, best seen from a vantage point called "Vista do Rei" south of the crater.
Another curiosity in the island is the food prepared in hot volcanic rock. A favorite dish is "Cozido das Furnas", in which meat and vegetables are stewed in pits in the heat of the volcanic earth. Furnas itself is a popular whitewashed town with hot springs used in the treatment of respiratory ailments and rheumatism.
Nearby is the beautiful Parque Terra Nostra, a garden with a remarkable collection of trees and plants, as well as an odd swimming pool with warm yellow water faced by the Terra Nostra Hotel.
The capital, Ponta Delgada, is also the capital of the entire archipelago and the tourist heart of the island. Its arcades and 18th century city gates, fine baroque churches, and volcanic cones rising on distant hills are its main sights. To the north of the city gates stands the Church of São Sebastião, founded in 1533 with a fine Manueline portal intricately carved in limestone. The sacristy is decorated with tile panels and 17th century furniture.
In the center of the island is a majestically beautiful spot, Lagoa do Fogo, a crater lake formed by a volcanic eruption in the 16th century.
An activity that takes place in São Miguel that doesn't happen anywhere else in Europe is tea production, and you may visit the Gorreana Tea Factory and Plantation.


SANTA MARIA is the island where Christopher Columbus stopped, and there is a church where he knelt in prayer and a statue commemorating his visit in the fishing village of Anjos. The village of Santo Espirito on the east coast is also worth visiting for the pretty baroque church of Nossa Senhora da Purificação, adorned with black lava decoration.
To the north is São Lourenço Bay, popular for its narrow beaches with turquoise water.
This peaceful island enjoys the most hours of sunshine and the waves of its small beaches are good for surfing.

STAY AT A HOTEL IN SANTA MARIA»


The island of TERCEIRA was the third Azorean island to be discovered and where Vasco da Gama buried his brother Paulo after their journey to India. It is distinguished by its capital, Angra do Heroismo, which is on UNESCO's World Heritage list as a prime example of European town planning. Its 16th-century cathedral, fine churches, and mansions are all of considerable interest.
The best view of the harbor and the city is from Monte Brasil, a crater on the western side of the bay. At the foot of Monte Brasil is São João Baptista Fortress, one of the largest examples of 16th century European military architecture. Another fortress by the harbor, Fortaleza de São Sebastião, dates from the same time.
To the northeast of the island is Algar do Carvão, a dramatic volcanic hole with an enormous subterranean cave open to visitors.
A memorable experience in Terceira is the "Touradas à Corda", the running of rope-restrained bulls that takes place from spring to autumn.

LOOK FOR HOTELS IN TERCEIRA»

Angra do Heroismo was declared a World Heritage Site because:
"This was an obligatory port of call from the 15th century until the advent of the steamship in the 19th century. The 400-year-old São Sebastião and São João Baptista fortifications are unique examples of military architecture."


The small, peaceful island of GRACIOSA is gracious, as its name suggests. It is known for its Dutch-style windmills and white houses with wrought-iron balconies and oval windows in its largest town, Santa Cruz.
On the opposite end of the island is Furna do Enxofre, where visitors can descend into a volcanic crater with a huge cave and lake of hot sulphurous water.

STAY AT A HOTEL IN GRACIOSA»


SÃO JORGE is mostly famous for its delicious, cured cheese, which is exported to mainland Europe. It is a long, thin mountainous island, where sheer cliffs drop to the sea, offering magnificent views of the central islands.
Almost all of the villages are set on small coastal plains called "fajãs." Fajã do Ouvidor on the north coast affords bird's-eye views, as does the Fajã dos Cubres viewpoint not too far away.

STAY AT A HOTEL IN SÃO JORGE»


The highest mountain in Portugal is located in the island of PICO, which is seen from the neighboring central islands. Soaring out of the Atlantic up to 2350m (7700ft), it is part of the Mid-Atlantic Ridge, the world's greatest mountain range, where the African, Eurasian, and American plates of the Earth's crust are being pulled apart.
In winter the peak is covered in snow, other times it is wrapped in cloud. Although it is a strenuous climb, it is a fantastic experience and an impressive sight.
The waters around the Azores are visited by a great variety of whales and dolphins, as told in Herman Melville's famous Moby Dick. Whale-watching is one of Pico's main attractions, done on small boats in the company of a guide. The trips can last for about three hours, and may be booked at the tourist office.
A small whaling museum, Museu dos Baleeiros, recalls the time when whaling was a traditional part of Azorean life. Its fine scrimshaw collection contains engraved sperm-whale teeth and ivory walrus tusks.
Pico is also known for its wine, regularly exported to mainland Europe. Its vineyards are protected as a World Heritage Site.

The landscape of the Pico Island Vineyard Culture was declared a World Heritage Site because:
"The 987-ha site on the volcanic island of Pico, the second largest in Azores archipelago, consists of a remarkable pattern of spaced-out, long linear walls running inland from, and parallel to, the rocky shore. The walls were built to protect the thousands of small, contiguous, rectangular, plots ("currais") from wind and seawater . Evidence of this viniculture, whose origins date back to the 15th century is manifest in the extraordinary assembly of the fields, in houses and early 19th century manor houses, in wine-cellars, churches and ports. The extraordinarily beautiful man-made landscape of the site is the best remaining area of a once much more widespread practice."


There is a magnificent view of Pico's volcano from the island of FAIAL. It was settled by Flemish farmers in the 15th century, and is a fertile island with a lively, cosmopolitan atmosphere and mild climate. It is also a popular port for yachts and cruise ships, with the marina of its capital, Horta, serving as a meeting place for transatlantic sailors. A famous visitor was Captain Cook, who commented on Horta's fine houses and gardens when he called here in 1775.
Perhaps the most famous attraction in Faial is Peter's Café Sport, where sailors from all over the world meet, and contains a museum displaying sperm-whale teeth engraved by whalers.
Another spectacular attraction is the Capelinhos volcano. It last erupted in the late 1950s, and remains devoid of vegetation.
It is also worth seeing the island's central caldeira, a vast green crater with magnificent views.


FLORES is an island celebrated for its beautiful, natural landscape, including seven lakes in its central area. It provides a full range of watersports activities, as well as colorful villages. Its name derives from its abundance of flowers.
The most scenic part of the island is the south, with Lagoa Funda, meaning "deep lake," as its main sight. It is a large crater lake at the base of a mountain, from where it is possible to see the strange rock formations and masses of flowers of Rocha dos Bordões to the west.
Exploring the rest of this small island is finding waterfalls plummeting down over steep rocks and wild landscapes of basalt.

STAY AT A HOTEL IN FLORES»


CORVO, the smallest of all the islands measuring only 6 by 3 km (4 by 2 miles), is visible from Flores. There is only one settlement and it is known for having only 2 taxis and one policeman. It is a truly blissful place, with an extinct volcano containing a green crater ("Caldeirão"), dotted with serene lakes with nine tiny islands reputedly resembling a map of the Azores.
The only way to visit Corvo is on a daytrip from Flores, as there is no accommodation for visitors. There are boat excursions from Flores.

STAY AT A HOTEL IN CORVO»


Top 10 EXPERIENCES in the Azores

1. Going whale and dolphin watching in Faial, Pico, or São Miguel.
2. Ascending the perfect cone of majestic Pico Volcano often shrouded in cloud for its fantastic panorama in Pico Island.
3. Finding the dazzling sight of the Sete Cidades lagoons in the island of São Miguel.
4. Admiring the fascinating landscape of Capelinhos volcano in Faial Island.
5. Having a wonderful walk and relaxing by the waters and magnificent luxuriant vegetation of Furnas in the island of São Miguel.
6. Standing by the marina of attractive Horta in Faial Island for the view of the imposing Pico volcano in the distance, followed by a break at the famous Peter's Café Sport for a drink and a chat with sailors from around the world.
7. Wandering around Angra do Heroismo's World Heritage old town center, admiring its elegant architecture, ending at Monte Brasil, a volcanic crater with an outstanding view of the harbor.
8. Taking in the view of Corvo Island from the rocky shore of Flores Island followed by a walk through the island's verdant valleys and dramatic peaks, finding impressive waterfalls, numerous crater lakes, and the abundance of flowers the island is named after.
9. Strolling through the attractive streets and squares of Ponta Delgada in the island of São Miguel.
10. Enjoying a meal cooked underground in the steaming volcanic hot springs in São Miguel Island.


HIGHLIGHTS of each Azorean Island