The Garden of the Atlantic 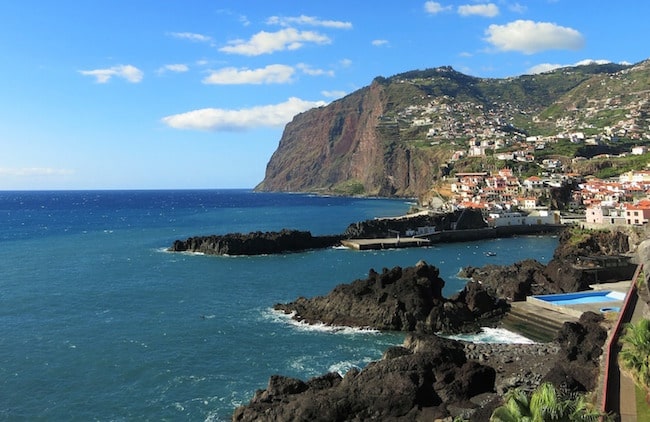 The semi-tropical island of Madeira has long been one of Portugal's most sought-after travel destinations. It offers a unique combination of extraordinarily beautiful scenery and excellent all year-round climate, along with some of the world's best luxury hotels such as Reid's Palace and Cliff Bay Resort Hotel.

Discovered by Zarco in 1419 on behalf of Prince Henry the Navigator, Madeira became a regular port for ships coming from the New World and Asia that often left specimens of exotic plants. Today it is often referred to as "God's Botanical Garden," and "The Floating Flower-pot."

A statue of Zarco now stands in the center of FUNCHAL, the capital of Madeira.
Its cathedral dates from the early days of its colonization, completed in 1514 with choir stalls depicting saints, prophets and apostles in 16th century costume. Nearby are the outstanding Botanical Gardens, displaying plants from all over the world.
By Praça do Municipio, the attractive main square, is the Sacred Art Museum, displaying religious art, Flemish paintings, and sculptures.

Looking down on the island's capital is MONTE, from where it is possible to take a famous toboggan ride, a kind of wicker sofa attached to wooden runners that is guided down steep lanes by a pair of drivers wearing boaters and white flannels, reaching Funchal in 20 minutes. This unique form of transport was invented by an English resident looking for a speedy way to get down to his office from his mansion, and is similar to the toboggan runs once used in the island to slide farm produce to the harbors below.
Worth visiting in Monte is the Nossa Senhora do Monte Church, the focal point of an annual pilgrimage that takes place every August 15. To the left of the church are the superb Monte Palace Gardens, laid out in 1894 with a maze of pathways, fountains, cascades, and exotic plants from different continents.

Moving north from Monte is perhaps the most spectacular sight in the island, PICO DO ARIEIRO. Reaching the top of this mountain, visitors often meet the clouds as they admire a stunning landscape of volcanic rocks.
Connected to Pico do Arieiro by a 10km (6-mile) path, is PICO RUIVO, Madeira's highest mountain. The walk from Pico do Arieiro reveals awe-inspiring mountain scenery, taking two to three hours. Alternatively, a well-marked trail from the village of Achada do Teixeira leads visitors to the top in 45 minutes.

A popular activity in Madeira is following the unique lavada trails, a complex network of man-made water channels that irrigate the mountain slopes, carrying water for long distances to banana groves, vineyards, and gardens. Hikers follow their routes to explore the island, reaching remote spots not accessible by road. These trails can be quite magical, especially one called Lavada do Risco that lasts for about 30 minutes, ending at a waterfall.

More of nature can be appreciated at the World Heritage LAURISSILVA FOREST, a true living treasure of rare vegetation. It is part of the Madeira Natural Park, and visits must be booked in advance.

West of Funchal is CAMARA DE LOBOS, a pretty fishing village set amid rocks and high cliffs often painted by Winston Churchill who visited the island regularly. Ten kilometers (6 miles) west of the village is CABO GIRÃO, one of the world's highest sea cliffs. Peaking at a dramatic 589m (1932 ft) above sea level, it offers a thrilling panorama down to the pounding ocean.

North of Camara de Lobos is an idyllic spot called CURRAL DAS FREIRAS that translates to "Nuns' Refuge." The nuns were those of Funchal's Santa Clara Convent who fled to this spot during a pirate attack in 1566. The scattered village can be admired from a viewpoint perched high above it.

The most famous village in Madeira is SANTANA on the northern coast, where the islanders' traditional A-shaped thatched cottages have been carefully restored.

A remote coastal village worth visiting is PORTO MONIZ, all the way in the northwest corner of the island. Its main attraction is a series of natural rock pools with warm water. The beautiful setting together with being showered by the spray of the waves breaking against the rocks is perhaps an even more enjoyable experience than laying on a sandy beach.

But for those looking for golden sand, the island of PORTO SANTO has a splendid 9km (6-mile) beach ideal for sunbathing and all sorts of water sports. It is a small island located north of the main Madeira Island famous for its former resident, explorer Christopher Columbus. Columbus moved to Porto Santo in the 1470s and later married the daughter of the island's first governor, Bartolomeu Perestrelho. The house built from rough stone where he lived in the 15th century is now a museum and contains an account of what is known of Columbus' life, along with maps, paintings, and engravings.


Porto Santo is linked underwater to another separate group of islands, the barren ILHAS DESERTAS. Only 16km southeast of Madeira, they can easily be seen from the main island's southern shores.
The two islands, Deserta Grande and Bugio are not inhabited and stand as a nature reserve where seabirds, wild goats, and a colony of monk seals live in harmony. These islands can sometimes be visited by boat from Funchal, and for those interested in wildlife and wilderness regions, it is worth a visit.

There are several festivals throughout the year in Madeira. Funchal's buildings transform themselves into a huge Nativity scene with more than 250,000 colored lanterns for Christmas and the New Year's firework show is of international renown. Other festivals include Carnaval, the dazzling Flower Festival during the whole week after Easter, the Classical Music Weekends in June, and the Festival of Madeira Wine, celebrating the harvests in the second week of September.

The Laurisilva Forest was declared a World Heritage Site because:
"The site contains the largest surviving relict of the virtually extinct laurisilva forest type that was once widespread in Europe. This forest type is considered to be a center of plant diversity containing numerous rare, relict and endemic species, especially of bryophytes, ferns and flowering plants. It also has a very rich invertebrate fauna. Endemic species include the Madeiran long-toed pigeon and some 66 species of vascular plants"

1. Enjoying the sophistication of a luxury resort at some of the world's best hotels like Cliff Bay Resort Hotel or Reid's Palace with magnificent views over the island.
2. Walking above the clouds in Pico do Arieiro for the magnificent panorama of the island.
3. Hiking the island's highest peak, Pico Ruivo, for the breathtaking view.
4. Going for a walk through Funchal's attractive old town and ending at its fine botanical garden.
5. Lying on Porto Santo's magnificent nine-kilometer-long sandy beach.
6. Visiting picturesque Câmara de Lobos to understand why it has long been a favorite of painters such as Winston Churchill.
7. Bathing in the natural ocean swimming pools formed among the rocks of Porto Moniz.
8. Trekking down a levada trail in the island's rainforest or understanding why UNESCO declared Laurissilva Forest a World Heritage Site with a walk through its vegetation.
9. Experiencing a thrilling ride in a wicker and wooden sled from Monte to Funchal.
10. Taking a pleasant excursion to Santana for its famous thatched houses amid a profusion of flowers.

Madeira's wine has been famous for over five centuries. It was a favorite of Napoleon, Russian czars, and of the United States' first president, George Washington. It was the wine chosen to toast the signing of America's Declaration of Independence and even Shakespeare wrote of Falstaff's willingness to trade his soul for "a cup of Madeira and a cold capon."

The Azores - A variety of landscapes and traditions; unique architecture; holidays for the nature-loving