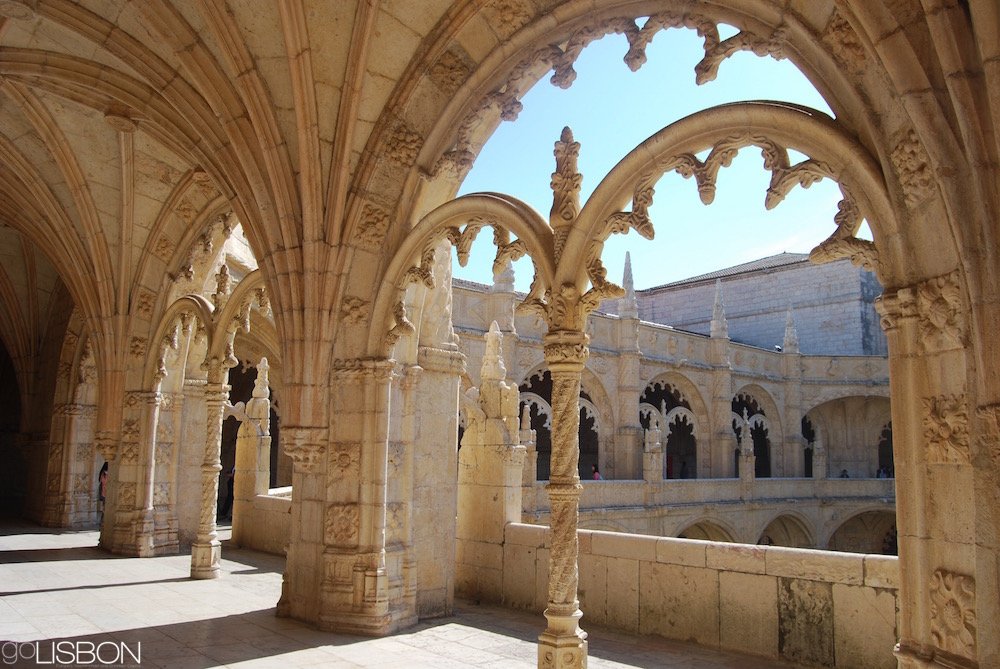 The Jeronimos Monastery is the most impressive symbol of Portugal's power and wealth during the Age of Discovery. King Manuel I built it in 1502 on the site of a hermitage founded by Prince Henry the Navigator, where Vasco da Gama and his crew spent their last night in Portugal in prayer before leaving for India. It was built to commemorate Vasco Da Gama's voyage and to give thanks to the Virgin Mary for its success.
Vasco da Gama's tomb was placed inside by the entrance, as was the tomb of poet Luis de Camões, author of the epic The Lusiads in which he glorifies the triumphs of Da Gama and his compatriots. Other great figures in Portuguese history are also entombed here, like King Manuel and King Sebastião, and poets Fernando Pessoa and Alexandre Herculano.

The monastery was populated by monks of the Order of Saint Jerome (Hieronymites), whose spiritual job was to give guidance to sailors and pray for the king's soul. It's one of the great triumphs of European Gothic (UNESCO has classified it a World Heritage monument), with much of the design characterized by elaborate sculptural details and maritime motifs. This style of architecture became known as "Manueline," a style that served to glorify the great "discoveries" of the age.

The cloisters are magnificent, with each column differently carved with coils of rope, sea monsters, coral, and other sea motifs, evocative of that time of world exploration at sea. Here is also the entrance to the former refectory that has beautiful reticulated vaulting and tile decoration on the walls, depicting the Biblical story of Joseph.
The church interior is spacious with octagonal piers richly decorated with reliefs, and outside is a garden laid out in 1940 consisting of hedges cut in the shape of various municipal coats of arms of Portugal. In the center is a large fountain also decorated with coats of arms, often illuminated on special occasions.
The garden leads to a small park faced by a row of pretty 16th-century houses that are home to a number of traditional restaurants with outdoor seating. There you can see a curious Thai pavillion, which was built in Bangkok and shipped to Portugal in 2011 to commemorate the 500th anniversary of the Portuguese arrival in Thailand, which led to the first alliance between that country and a European nation.


Where: Praça do Império, Belem
How: Train from Cais do Sodré (to Cascais, stopping at Belém station) or tram 15
When: 10AM-5PM (Oct.-April), 10AM-6PM (May-Sept.) (Closed Mondays)
What: www.mosteirojeronimos.pt
How much: 10 euros, or FREE with the Lisboa Card